A Goth Tourist in Budapest: The Labyrinth of Buda Castle 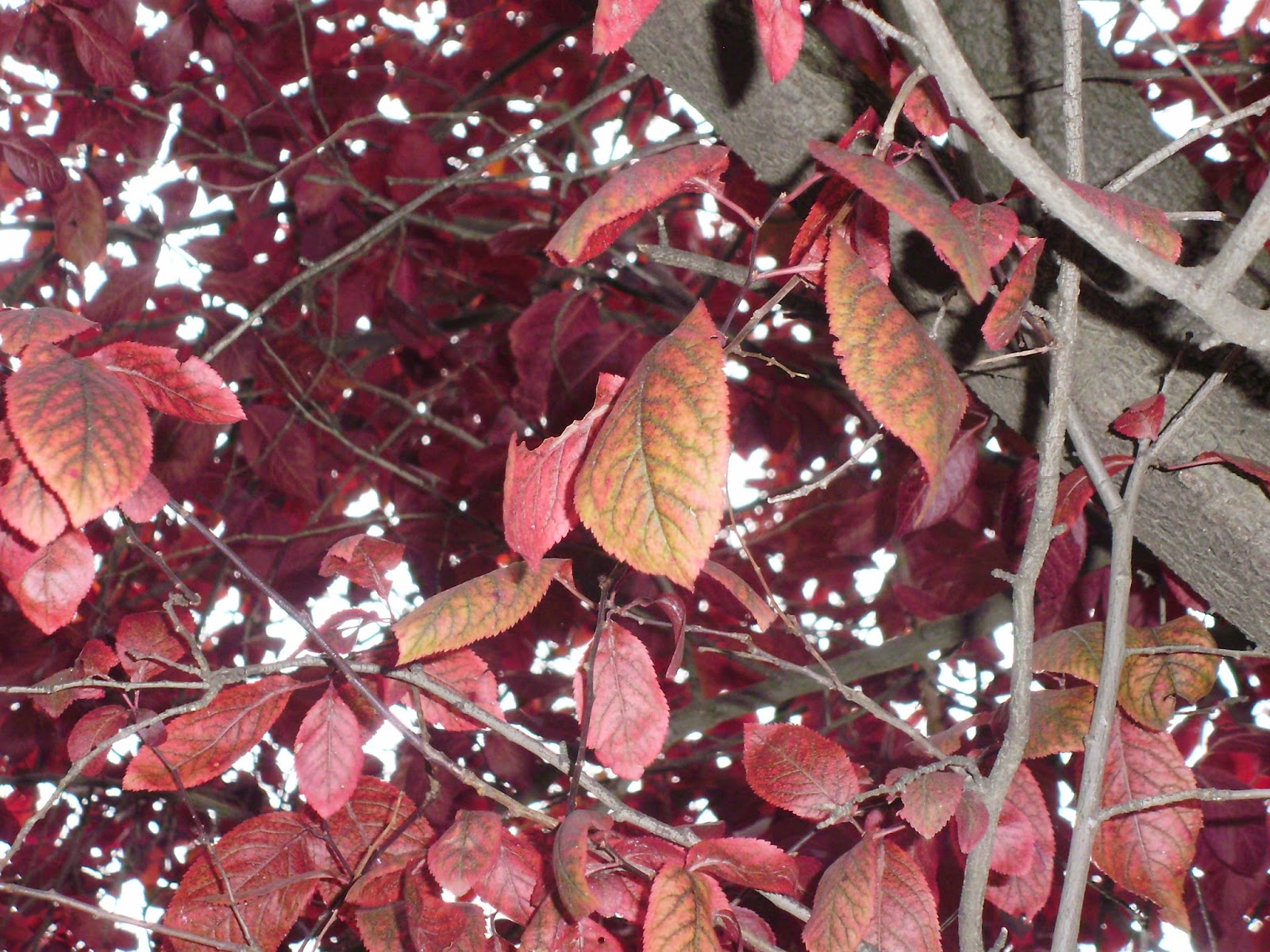 Three nights ago I returned from Budapest and I am on the move this whole week too, so I do not have a chance to actually really go through all photos and write about all goth-y things I did or see on my trip. But I definitely do want to tell about one attraction in Budapest for goths: The Labyrinths of Buda Castle. 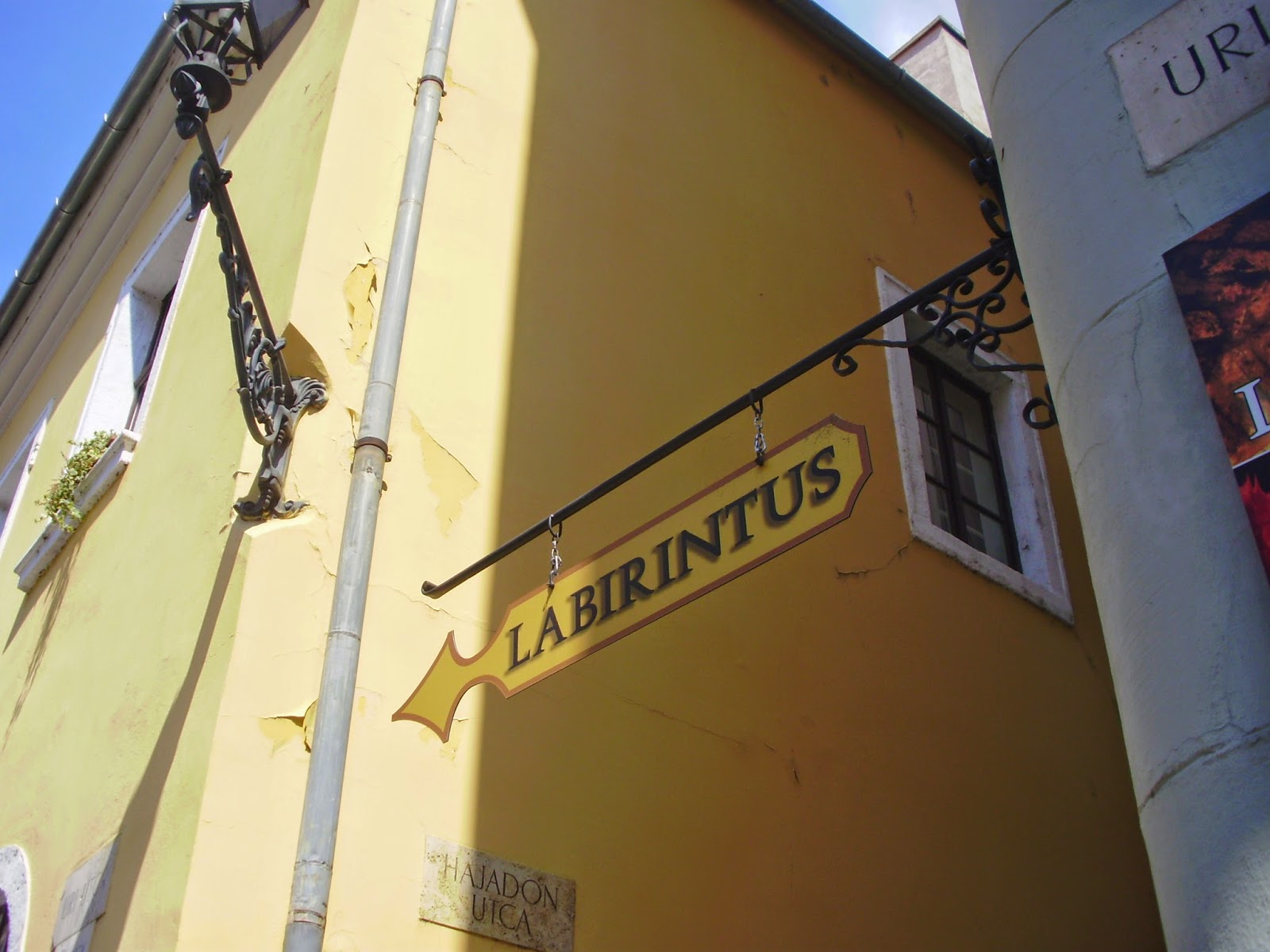 There was a mention of them on my tourist information book but online a webpage of Budavári Labirintus claimed the labyrinths are closed for good. On the tourist info of Budapest one can see that there is another organizer (and perhaps owner too?) of the entrance to the labyrinth.  I am not sure but to me it seems this Budavári Labirintus was as an organisation more interested of history. The one that now has the Labyrinth tour had made it for a wider customer base. 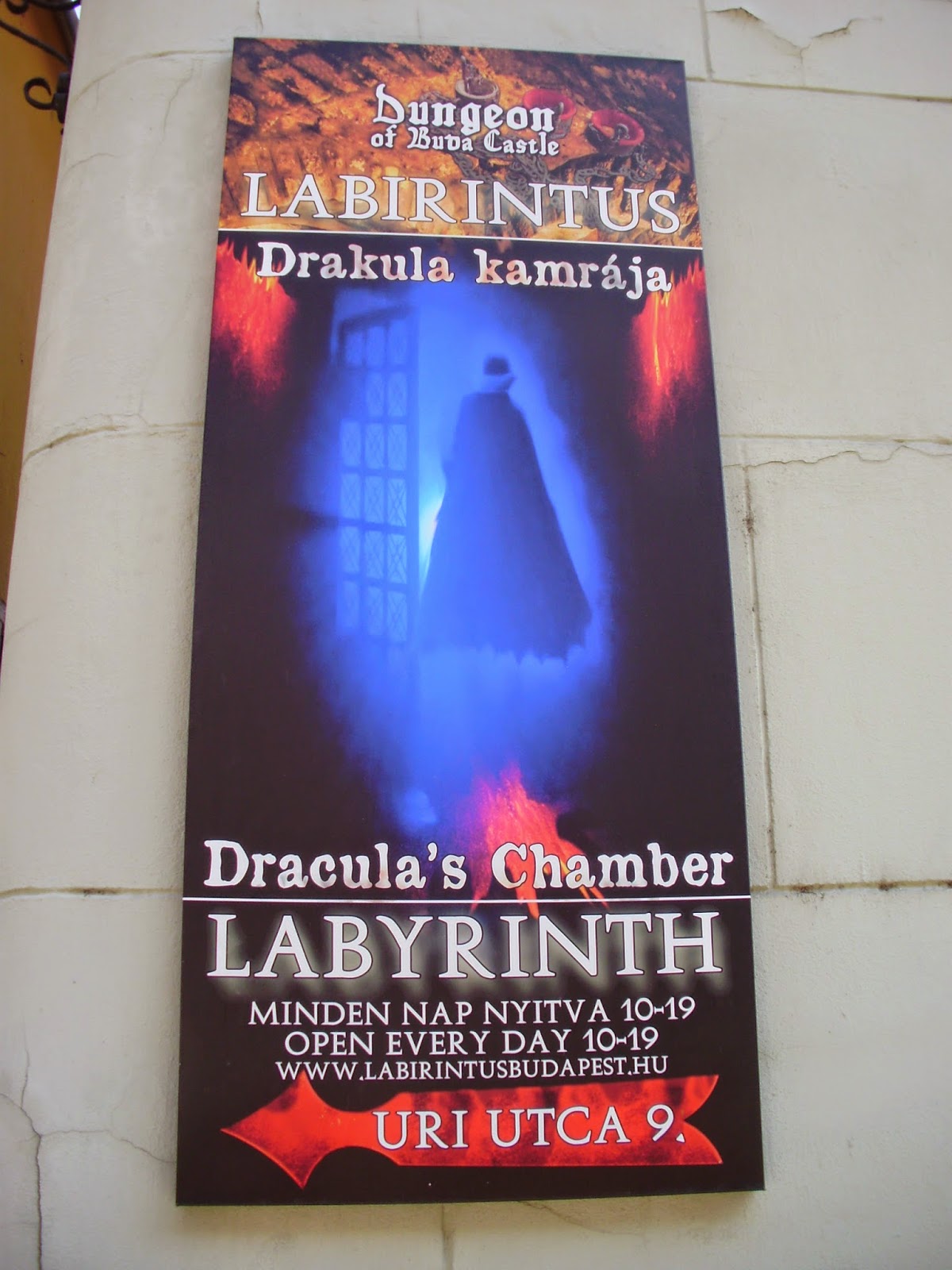 They had organized some slightly creepy compositions of mannequins in the costumes of Giuseppe Verdi's opera Un Ballo in Maschera (a masked ball). With the dummies there were also props from the Cinderella Ballet Show, if I remember correctly. One was not allowed to take photos, so I have no aid for my poor memory. Parts of Verdi's opera were playing in different parts of the labyrinth.

There was also the rather cheesy horror show too: Vlad the Impaler, who lived on the 15th century, was held captive in Buda for a while and since Vlad is said to be one of those things Bram Stoker took inspiration of while writing his novel Dracula, these things were happily remixed in the information boards for tourists. With them there of coarse were tacky props of tomb crosses and the grave of Dracula and other stuff.

There was also a part where one could walk a little way in the dark and the only guidance was to hold a rope. They had put up signs that were daring and warning of creepy and foul things on the way and at some point there were some dummies in soldiers clothing and some child size dummies, like from some horror film. It was fun but since the labyrinth was really damp the rope one had to follow in the dark was wet, afterwards the had one had used to follow the rope smelled quite awful and dirty. 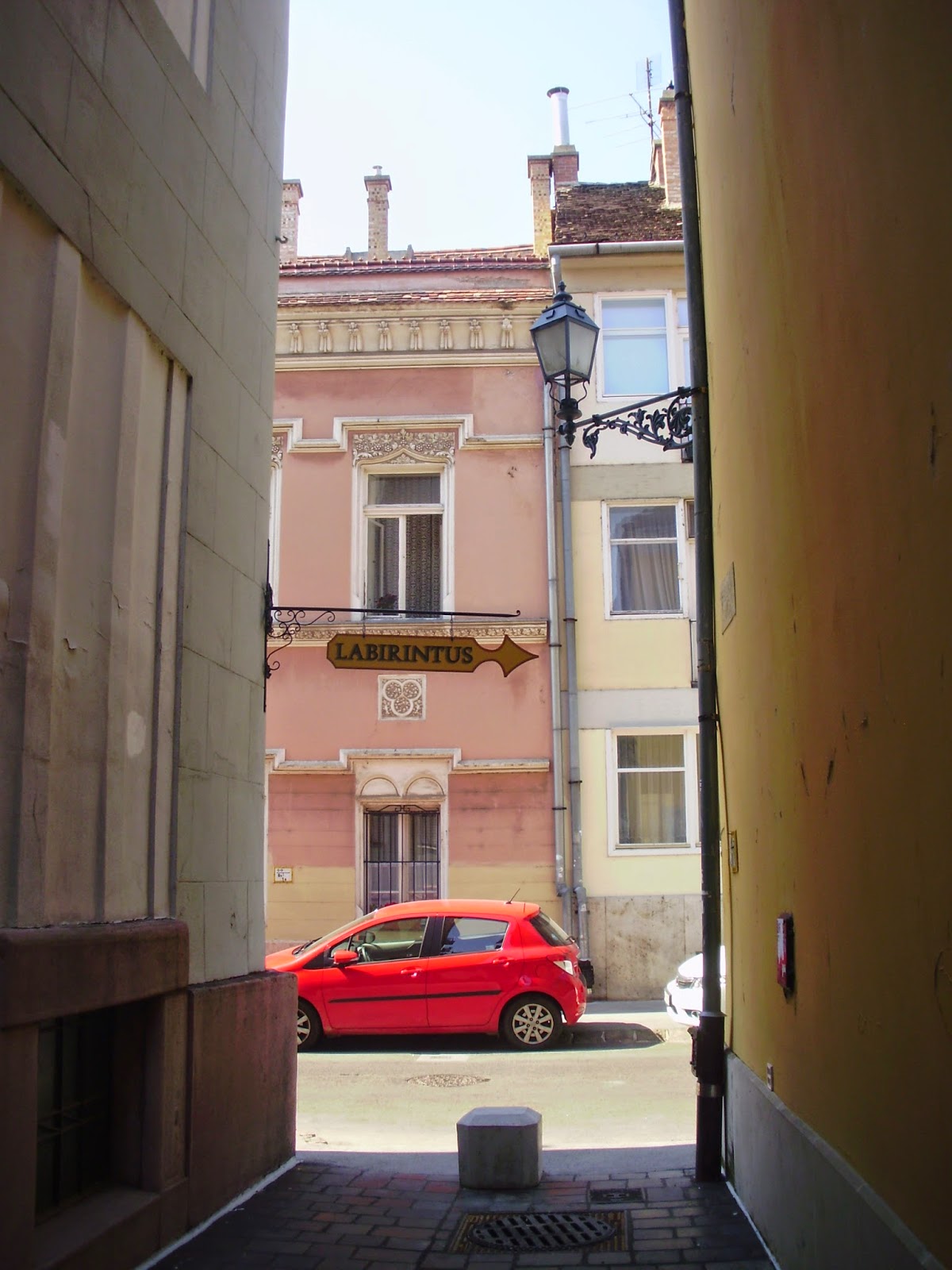 All in all the labyrinths were themselves interesting and the carnival like sideshows of Verdi's opera and Dracula were funny. At least the opera music sounded awesome in the tunnels! I do like those tacky sides of goth subculture but not excessively. Kitch is fun but I do prefer melancholy. I feel like there had been the possibility to make the Buda Labyrinths creepy with the actual history. I can not compare how the labyrinths were before and I can not know if I had liked them better but still I do recommend all goths visiting Budapest to take an hour and see the slightly cheesy Buda Castle Labyrinth too.

This little white rabbit pointed the way to the big flea market in the city's park Városliget and in the next week post I am going to show all the cool things I bought on my trip! 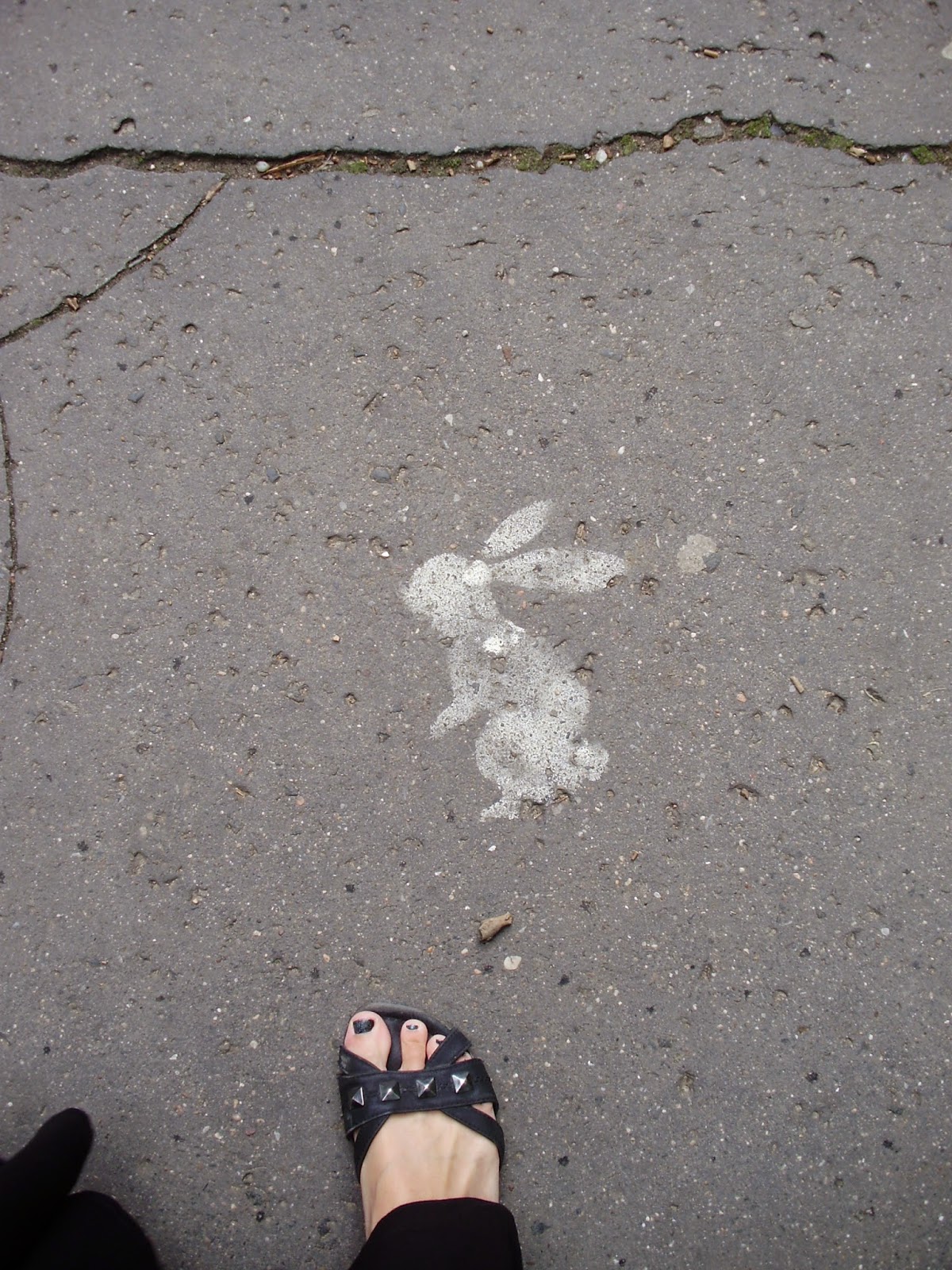 I visited EMMA (Espoo Museum of Modern Art) and here are my favorites of their permanent collection. For those who do not know, Espoo is the second biggest city in Finland and it is part of the "metropolis area", which includes the capital Helsinki and the two cities Espoo and Vantaa.

All three pieces of art are by Ismo Kajander, who was born the year the Second World War started. In the sixties Kajander travelled to Paris and he was influenced by the artistic movement le Nouveau Réalisme and started to make object collages. He has also made art with photography, he has won several prizes with his work and he has been a teacher at Aalto University School of Art, Design and Architecture and a principal in the first art school in Finland in which he had himself too studied 30 years earlier.

The name of this first object collage is "From the series Gloria Vanderbilt: The soul flies up to Osiris" and it was made year 1992. 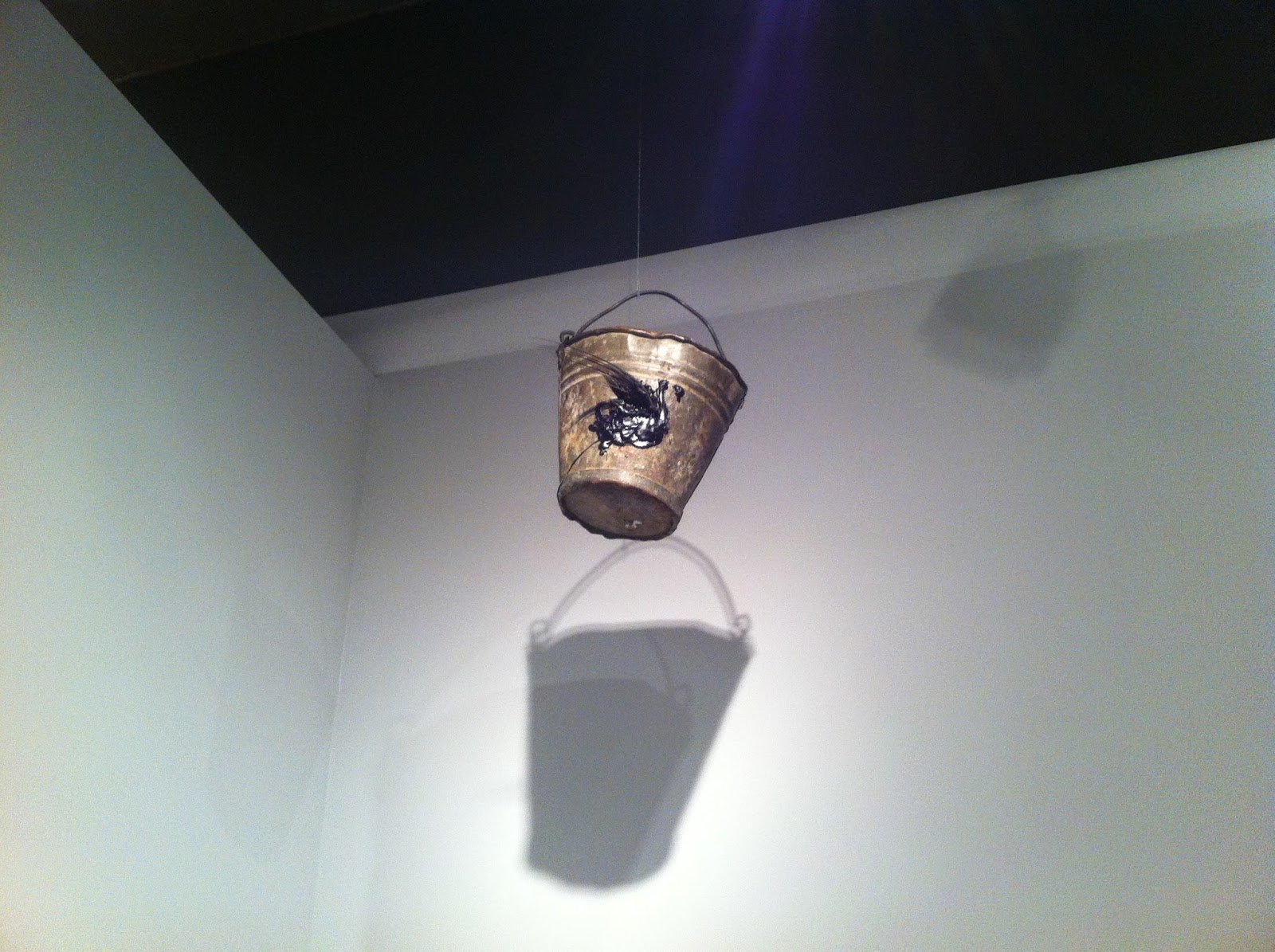 The object collage is made with tin bucket, pitch and a bird's wing. It hangs in the sealing higher than my head was so I am guessing there is about two or three meters between the tin bucket and the floor. I really do not know how I understand and interpret the name "The soul flies to Osiris" but this artwork is still (or maybe because of it) extremely appealing to me. 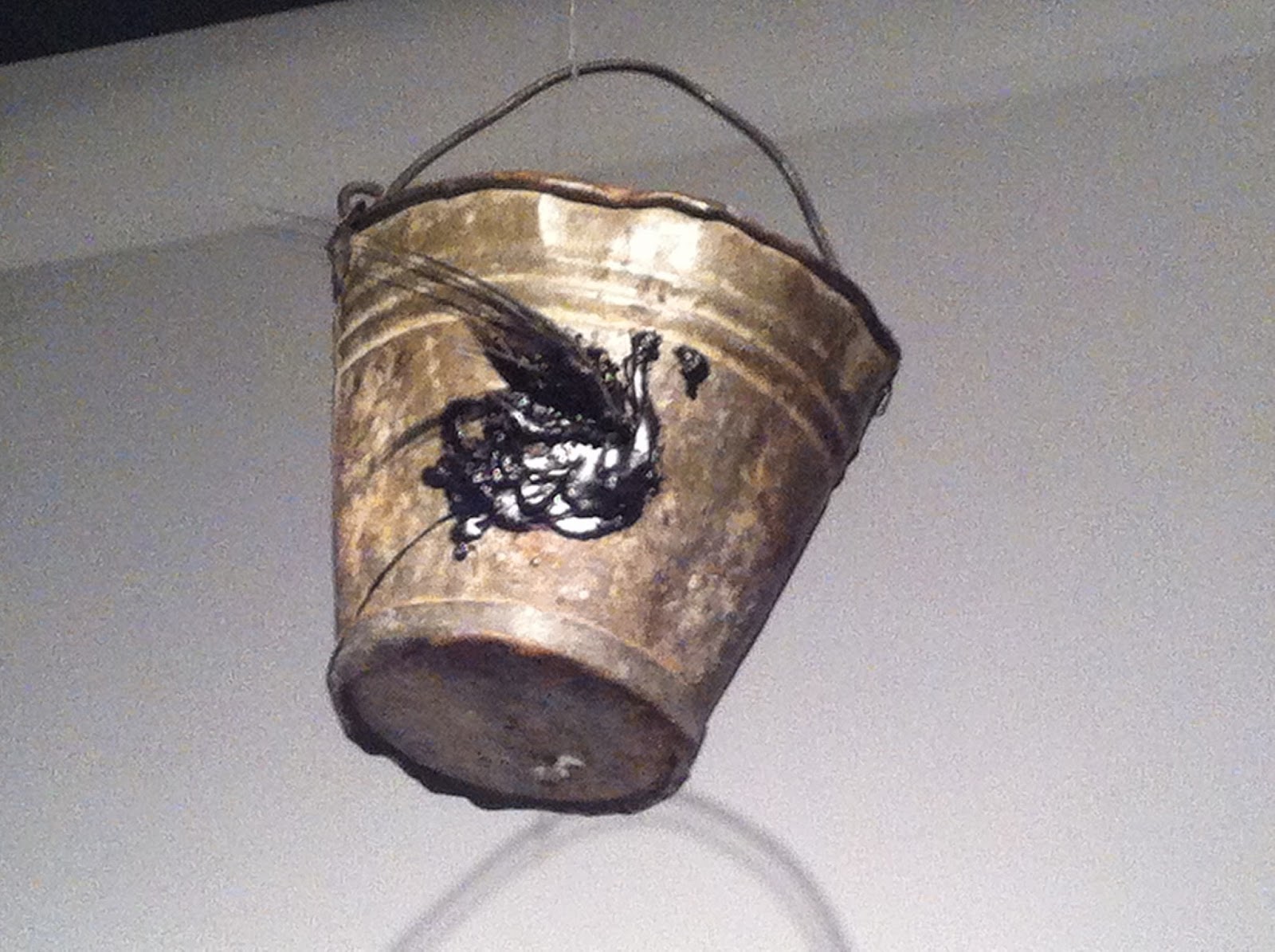 I really enjoy how there are similarities between the new realism and surrealism but the founders of le Nouveau Réalisme stated that it was "new ways of perceiving the real" and in the surrealism the artists personal symbolism is in much bigger role. Frankly I do not give a toss about "the artists intentions" when I am enjoying  her/his painting, installation or other work. I do not believe it is necessary to know the artists history and was the artists somehow traumatized as a kid. Nor there is a need to feel inadequate when looking at an abstract painting called "White and Gray" and some curator or the artist pops up and says "This painting is about the meaningless devastation of war. How did you not realize it instantly? You must be an ignorant idiot."

Of coarse being aware of conventions of art and culture, present things, news and happenings in the world helps to see contemporary art and artworks that represent it in new light and that way a viewer might enjoy more of all those installations, paintings and statues. I think that is for the viewers own enjoyment and fun, not so that the viewer won't have to feel stupid.

The second object collage I really liked is "A sheep called Albert". It is from year 2000 and I don't know if there was an Albert in the reality of 2000 giving some connotation to the reality (if we consider this collage to represent New Realism) but still I think this collage is interesting. It instantly makes me think about escape goats, white lies and in general the problems of communication and humanity. The objects of this collage are a bomb (deactivated I'm sure), clock-face, glass, clamps, plastic sheep and a dead pigeon. The poor pigeon is crushed underneath the bomb and every once in awhile that clock suddenly strikes and the voice is eerie in the big exhibition hall. 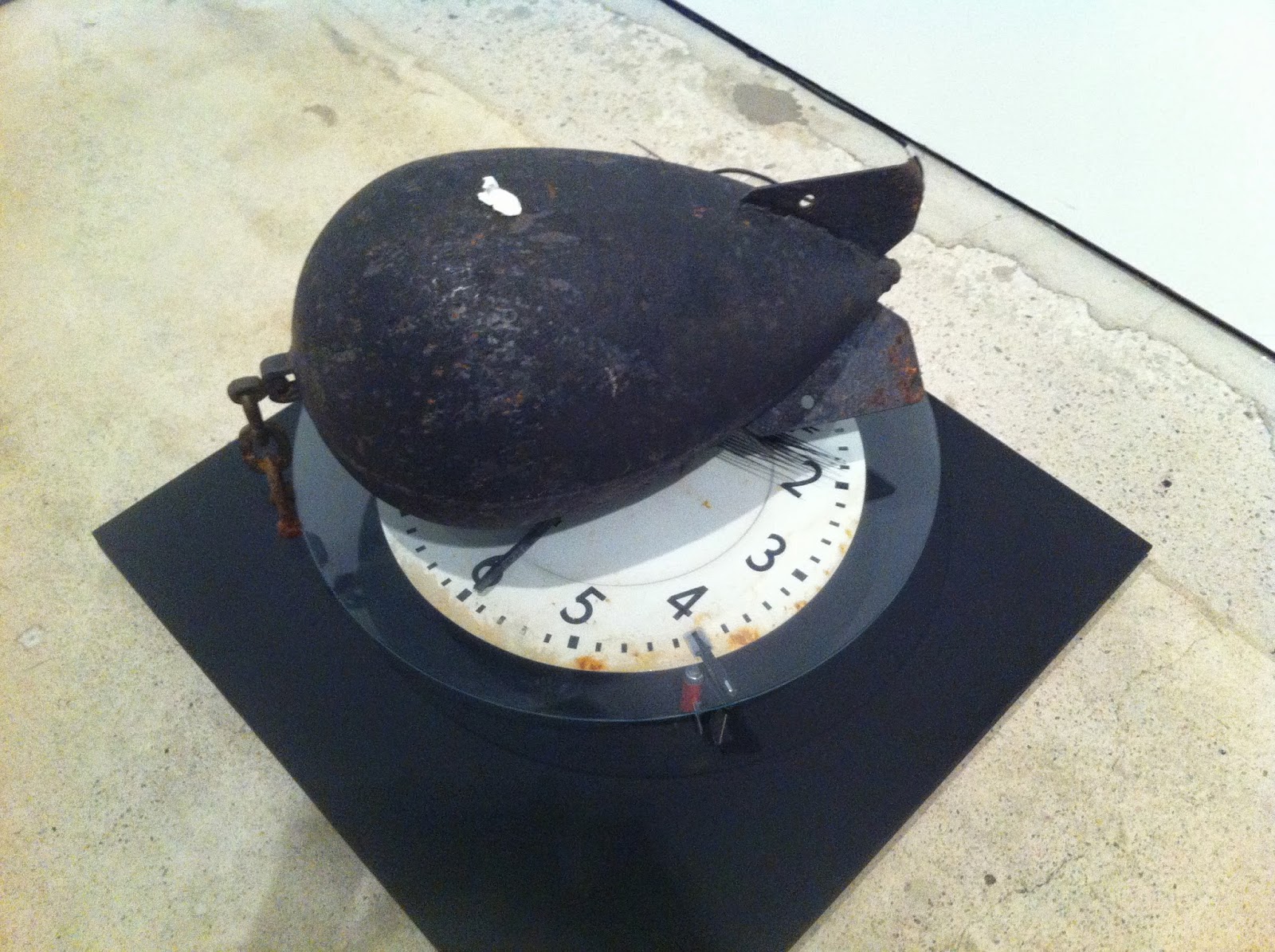 Here is a close-up of Albert. 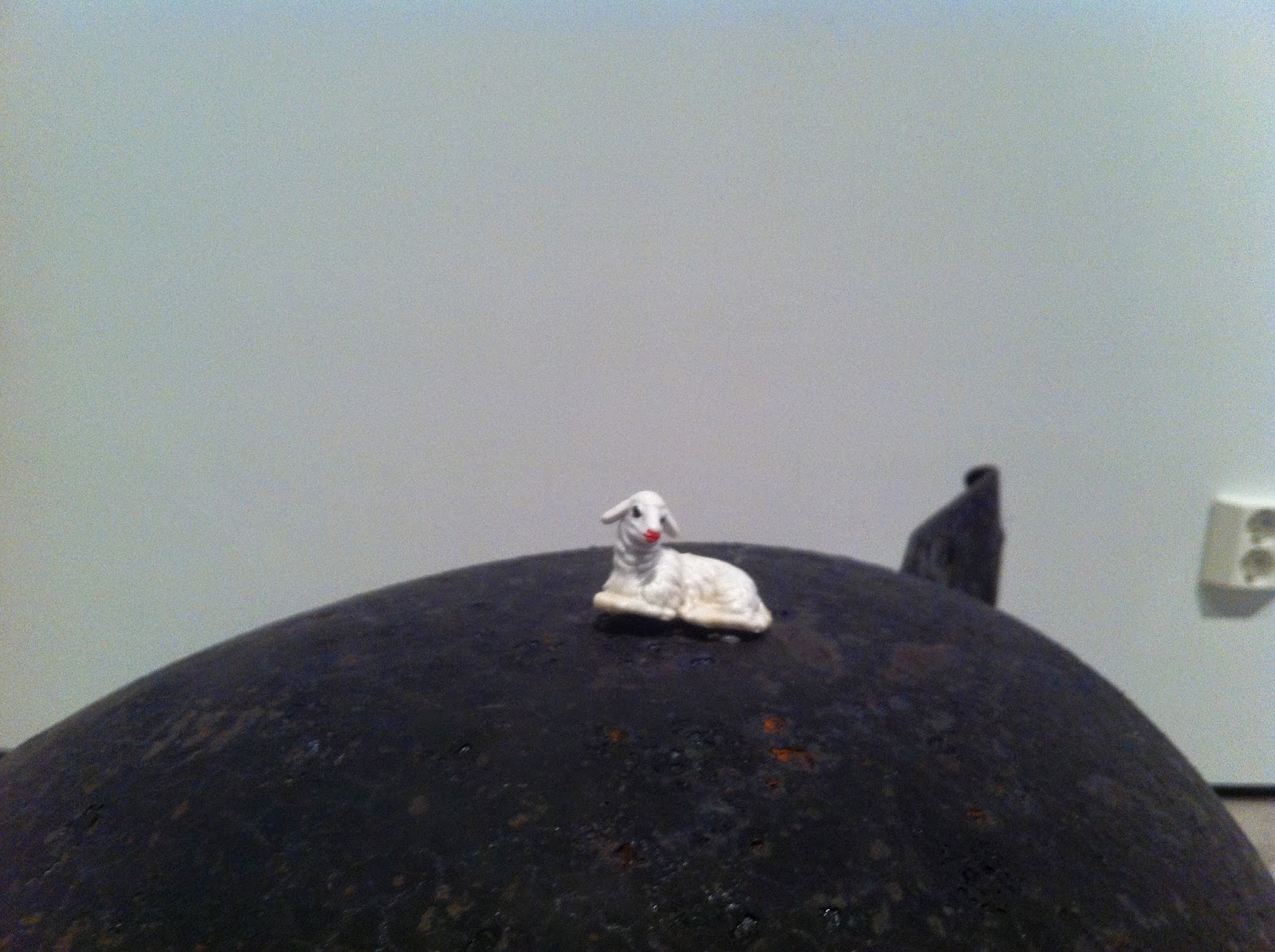 Third piece of art is "Breakfast with Foucault", also from year 2000. I guess to really get off of this collage it is necessary to know little something about Foucault and his ideas and essays and books about knowledge, power and also sexuality. I am not going to go on and on about them, I'll just say those are really interesting readings, if you like non-fiction! 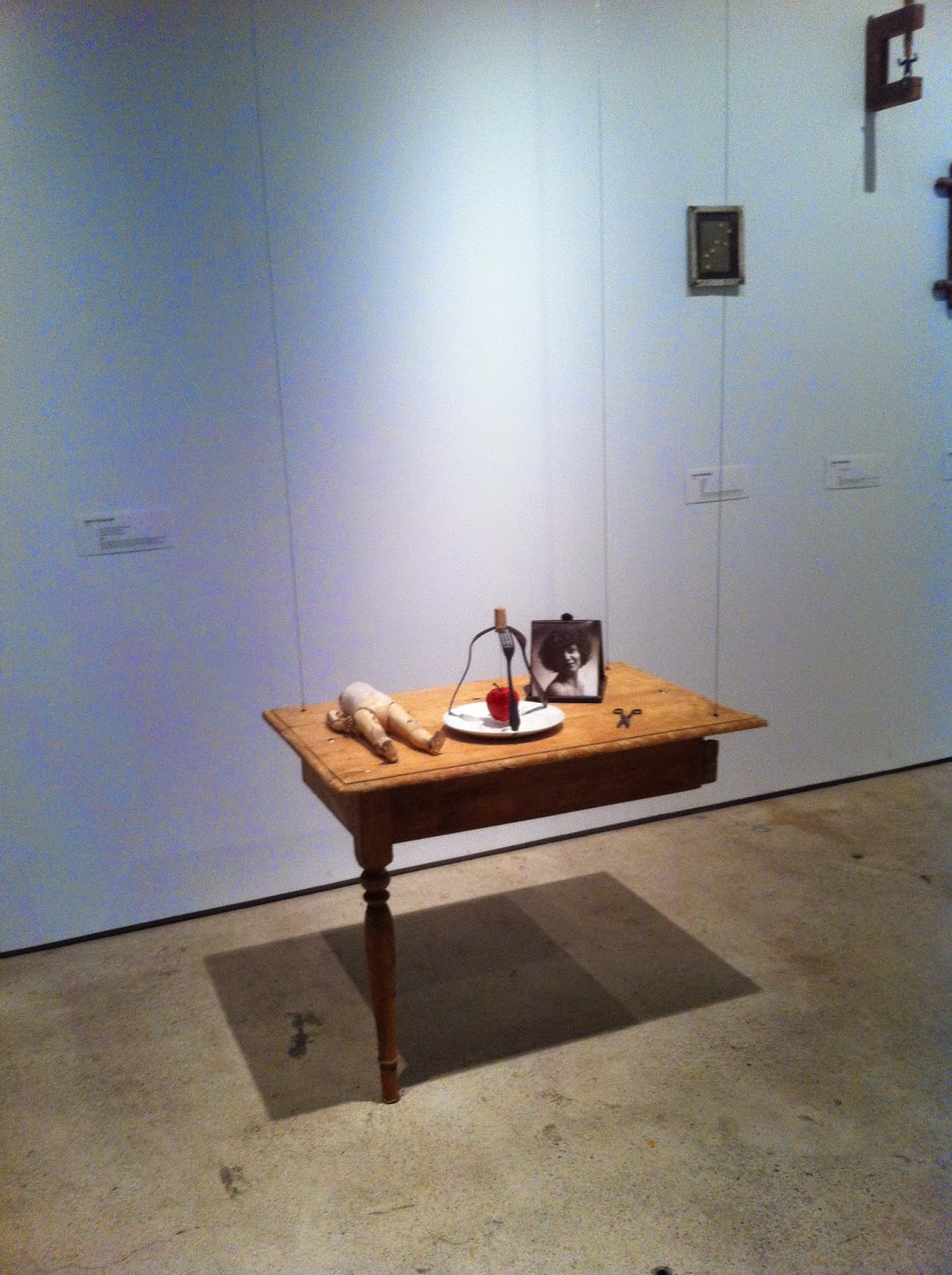 Another close-up. I think this breakfast is delightfully weird and creepy. 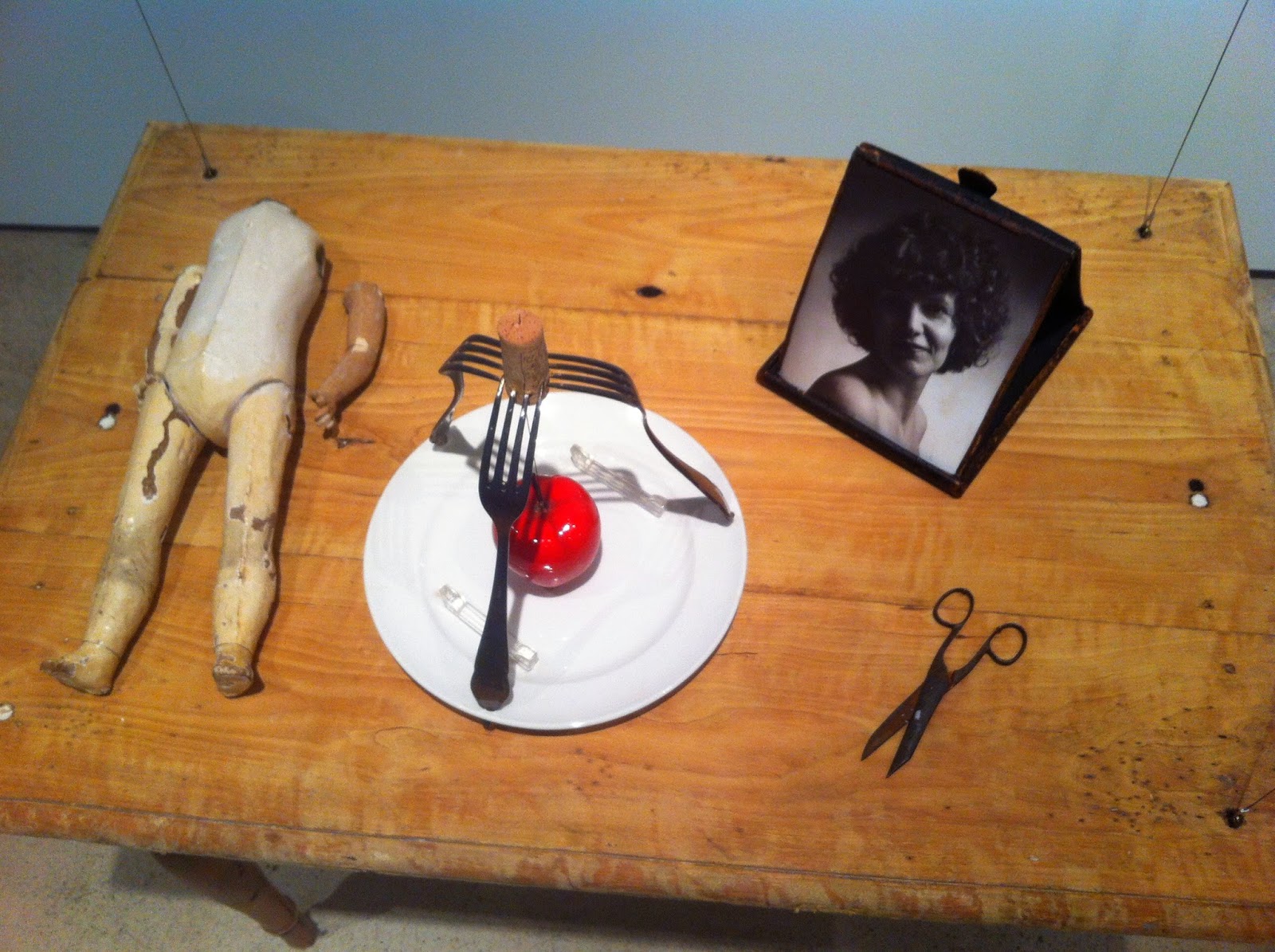 Gothic Art in Spotlight: Dreamlike Photography and the Cards Against Humanity

Last week I shortly visited Tampere because me and my literature student friends had decided to play Cards Against Humanity. It was hilarious and since it was a gorgeous sunny day, we played in a park. Oh, all that sinister laugh when somebody had a really cruel and witty answer card to the question!

Alas, I did not take any photos of the best answers, but here are some we made. The idea is either to fill up the blank parts or to answer a question.

A: "The violation of our most basic human rights."


And so on, I'm sure you all get the point! The more awful or absurd the answer, the bigger the probability you win a point. I must admit, some people in the park gave us rather disapproving glances when we played, yelled and laughed.


Besides this cool game I also visited a really good art exhibition in TR1, in the heart of Tampere. The exhibition was "Marja Pirilä: Carried by Light". Pirilä is a photographer who has concentrated on light and shadow. She uses a camera obscura technique on a whole new level. Camera obscura means "dark room" and that is the technique all cameras work and that is the word combination the camera has got its name. When you have a dark room (or a small box like the camera) and then you have a teeny tiny whole in one of the walls, the light from the other side comes through and makes a projection of the outside on the wall opposite. If I remember correctly, the camera obscura was invented during the Renaissance in Italy.

How does Pirilä take the camera obscura to the next level? By turning the space she is photographing into a camera obscura too. This way the outside of a grand room gets to creep inside the room and the result is breathtakingly beautiful. All these photographs are pigment ink prints.


The series "Milavida" was my favorite. There were also photos of humans with their rooms. Even though they too were interesting and beautiful, I did not find the pretty in a gothic way.


All pictures in this post are from this webpage. I also fell in love with Milavida # 2, 3 and 7. If you have the possibility, go see the exhibition in TR1 or google some more pictures of Marja Pirilä!