A Scary Christmas Legend: Nuuttipukki from the North

Since it is the season of Merry, I wish to share with you an old  and perhaps a bit sinister folklore story related to Christmas. Most of you are probably aware of the legend of Krampus, since an American horror/comedy movie came out this year with that same name. Really shortly said, Krampus is a mythological creature from the Alps, who is a sort of an Anti-Santa Claus. While Santa rewards nice people, Krampus punishes the bad ones. This post is about a whole other entity from the Nordic countries. This tradition spread from Sweden to Finland centuries ago, probably in the Middle Ages.

The spooky creature I am going to write about is called Nuuttipukki (it is translated as the New Year Buck in some sources), who is a horned, goat-like humanoid with an entourage of masked folk and he visits houses during the Saint Knut's Day. It used to be on January 7 but nowadays Saint Knut's Day is celebrated a week later. The tradition of Nuuttipukki still remained on the first week of the new year, though.

Nuuttipukki and his friends roam around the village and go from house to house insisting to have leftover foods and alcohol beverages after Christmas. It is bad luck not to yield to his requests, otherwise he might scare your animals, trash your garden and harass your servants (and he might still do that after food and drink, you never know with Nuuttipukki).

I wish to stress that this was not something that happened on the level of stories but in the reality too and it was not the master of the house who organized it. It was usually young men from another village who dressed as Nuuttipukki and his fellows and they might be quite drunk and mischievous. You could not be completely certain that food and booze would keep them happy.

This tradition was alive and kicking in Finland until the Second World War. Here is a photo from 1926. I believe the broom in this photo is part of the costume, to make this person more goat-like, so it is not a witch thing.
The blackmailing (that resembles trick or treating) was not the only reason for people to let this creature and his companions to the house. The other reason people were willing to let these rascals in was that Nuuttipukki was supposed to scare off the spirits of the dead before they became evil possessing spirits. It was believed that Christmas and its celebrations lured the spirits of dead relatives back to this world. This is the oldest reason for this carnivalistic celebration: the masks were to hide who was the one scaring the dead away so that the dead could not have their revenge on this person or persons.

Here is a photo of a mask of Nuuttipukki from the 19th century Finland. It is made out of sheepskin. This mask is from the collection of the National Museum of Finland and the photo was taken by Markku Haverinen.
Interestingly, Nuuttipukki is an older character than Santa Claus in Finland and the character of Santa resembled Nuuttipukki until the 1940's. Imagine Santa with a face like that! Even more, in Finnish language Santa is called "Joulupukki", so it is a very similar word with "Nuuttipukki".

As mentioned previously, it was believed that the dead Finns like the Christmas and in today's Finland it is still customary to commemorate the deceased relatives on Christmas. We take candles on the graves and on Christmas Eve the graveyards are astonishingly beautiful seas of candlelight. We also bring candles on the graveyards on All Saint's Day (about the same time as Halloween) to commemorate the dead and on 6th of December, which is our Independence Day, to commemorate the dead and especially those who died in the wars in which Finland fought to keep its independence. As you can see, the Finns are very respectable towards the dead.
Thanks for reading, I hope you found this interesting and entertaining!
Posted by Jade at 10:37 14 comments:

This volume has sat on my bookshelf for about two years and for some odd reason I have not featured it here on my blog. The Addams Family - an Evilution is a kind of an entertaining research on Chad Addams' creation, the Addams Family and how its characters evolved over time. 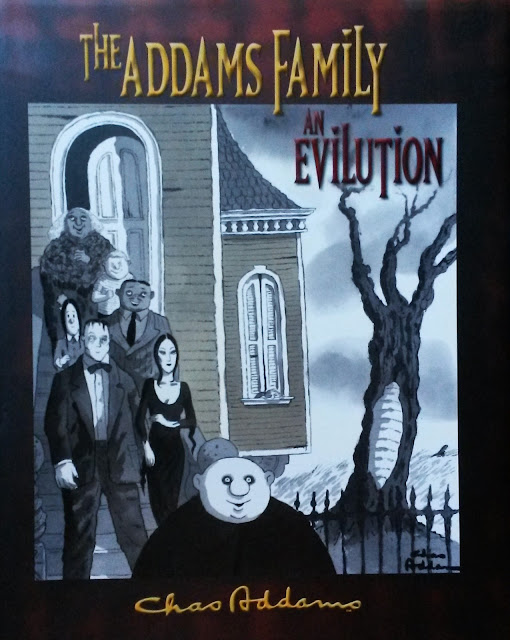 For me, the first Addams Family experience was the movies made in the 90's. After that, the old black and white TV-show. And finally I saw this book in an online shop and had the change to really read some of the original comics. This reversed order is quite understandable when regarding the fact that not the comics nor the old TV series were available at the period of time and the geographical place of my childhood. The point of this personal rambling is that the movies had shaped the way I saw the characters of Addams Family and I was surprised how different some of them are in the comics.

The Thing has changed completely from the comics and it is not even sure if the lurking little humanoid of the comics was the Thing. The old TV series made it to be a hand and I must say it is a delightful character. The Thing of the comics is seen on the photo of the front cover, it is spying the family from the window. In many of the comics there is this small creature lurking and watching, always outside of the family. In one single comic the Thing is something else than an observer: it is seen as a mere hand changing a vinyl on the family's gramophone. It is most likely this comic that inspired the character for the TV show.

The children too are relatively different and their way of interacting with each other has changed a lot in different media. In the comics Wednesday Addams is a sorrowful, quite timid child who is more like a sidekick for her brother in many pranks. This is the most astonishing difference for me and I must say I do think it is in a way improvement that Wednesday is much more livelier in the TV show and the character of the movies was a strong female role model for many a young girl.
I believe though, that if Wednesday had been more livelier and stronger character in the comics, it would not have worked as well. The dynamics of the family members would have changed and it would have required alterations to the other characters too.

Morticia Addams of the movies is much more similar with the comics' Morticia. Her character in the TV series is much more warm and kooky. I do not think this is a bad thing, it is merely an observation. I love all the incarnations of Morticia. 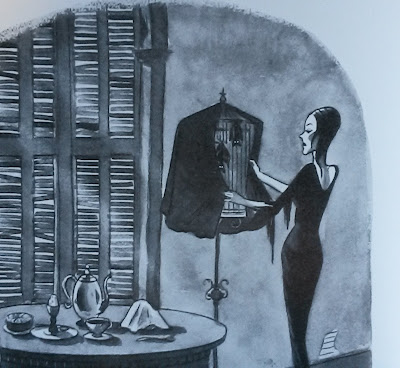 What I really like about The Addams Family - an Evilution is that it has the comics in it but also a culture and literature analysis on the comics and it ties them to the social environment and the historical era they were created in. I can warmly recommend reading the old comics of Chad Addams and also reading this particular collection with cultural analysis on it too.
Posted by Jade at 11:48 9 comments: