In Switzerland, there are two main attractions for goths: the HR Giger Museum in Gruyères and all things related to Mary Shelley, the author of The Frankenstein; or, the Modern Prometheus.

For those who are sporty, hiking and walking around is a way to get to admire the sublime and a bit scary scenery of this country. When we were there, temperatures were really high (34 degrees of Celsius / 92 Fahrenheit) so we did not take too long walks.

This statue of the Creature of Frankenstein is very near the center of Geneva. As you can see, we had an amiable stroll. Compared to the Creature I saw in Edinburgh, this fellow was more into holding hands.


Villa Diodati was the place where Lord Byron, John Polidori, Percy Shelley, Mary Godwin (future Mrs. Shelley) and Mary's half sister Jane Clairmont spent the summer of 1816. Well, Percy, Mary and Jane did have another residence rented, but they spent a lot of time in villa Diodati and that is the place where this small company had their little contest of writing a ghastly ghost story.

Nowadays, Villa Diodati is a private residence and one cannot trespass. But they do have a sign on their wall stating the history of the house and next to their garden is a small park where one can have a picnic.

And of course you get to have sly glimpses of Villa Diodati's garden when you walk past it. They have high fences, so it is not exactly peeping; you just see some treetops and the roof of their lovely old greenhouse.

If you are visiting Villa Diodati's surroundings (and it is summer!) take a bathing suit with you. From the villa there is a short walk to the Lac Léman (the huge lake) and if you walk a few minutes towards the center of Geneva, you'll arrive to the spot where the locals go for a swim.

How to get there

Villa Diodati is in Geneva, and if you are staying in a hotel, you are entitled to a day ticket to the public transport. The day ticket is valid during your whole stay (max. 14 days). So basically you get to travel around the city as much as you like. Bus 'number' A takes you almost next to villa Diodati.


The HR Giger Museum and Giger bar are situated in a medieval city called Gruyères. Other famous places to visit are the castle of Gruyères and a cheese factory.

You can buy a combined ticket to the HR Giger museum and the medieval castle. I can wholeheartedly recommend this, because the castle was very interesting and there was a lot to see. 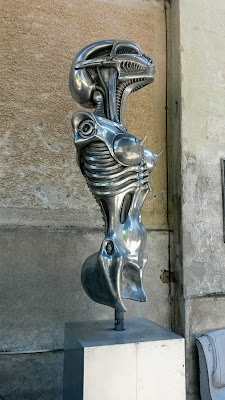 One was not allowed to take photos in the museum, which is very understandable. That statue was in front of the museum.

The exhibition consists of the main exhibition of Giger's works and they also have a two room section for changing exhibitions of contemporary artists.

Next to the museum of Giger is the Giger bar. Actually, the exhibition area for the changing exhibitions is situated in their second floor. This photo was taken from the balcony/corridor that led to the upstairs of the bar. 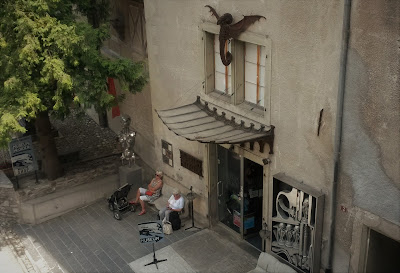 I found it rather cool that opposite the museum (and next to the Giger bar) was clearly a home for the elderly. At least that little square had dozens of old people with their walkers, just chilling on the benches. 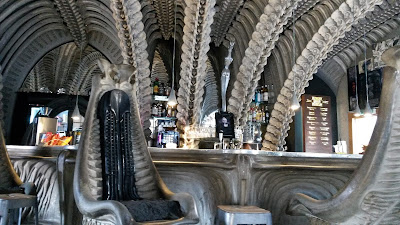 Château de Gruyères (the Castle of Gruyères) is a rather well preserved castle with a lot to see. I had fun visiting it, even though I am not a huge fan of castles.

The castle has a long and colorful history, which I am not going to quote here. I'll just say that during the 19th century it was bought by the family named Bovy and they with another family made it their summer residence.

Here taking photos was allowed, so I must show you this rather odd piece of celestial art: this carnevalistic angel. Or at least I interpret it to be some sort of a decorative object for a church or a chapel. 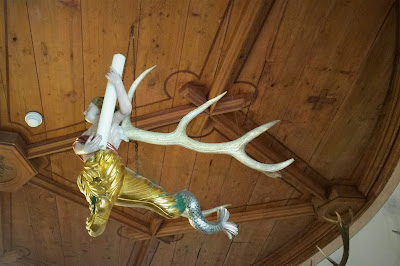 Apparently this decorative object has horns as wings. And it seems to be holding some sort of a divine announcement in the form of a parchment. Or, it might be a torch.

The castle too has a small changing exhibition featuring contemporary artists. It is in the tower that used to be for prisoners. During my visit they had works that clearly were inspired by surrealism and old folk tales but I cannot find any record of them from the castle's webpage. 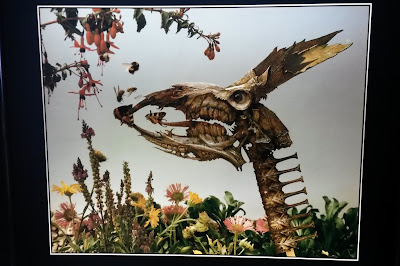 Their English webpage is under construction, so you'll get most out of it if you can read French. Italian page has also more material than the English one.

The only attractions are not merely these two museums. The city itself is very pretty and strolling around the streets is fun.

How to get there

The easiest ways to visit the city of Gruyères are by car, by train or by bus. If you have a car, you can drive up to the old town. If not, you'll have to walk uphill from the train station for about 20 minutes. We did not take a bus, so I have no first-hand knowledge about that route.

If you are traveling by train and do not have access to internet all the time, it is smart to buy your train tickets in advance. By this, I do not mean online but when you are on a train station the first time.

When buying a ticket from an automate, you do not have to specify the time you want to hop on a train, only the day. But why in advance? Because if you travel to a small town, you cannot buy a ticket from there to lets say Geneva.

Apparently small stations only have the local train company's ticket machine, and they do not sell tickets for national routes (like from Gruyères to Geneva). You first have to travel to a bit bigger city where they have also the SBB's ticket machine.

Speaking even a little bit of French is a huge plus, if you are traveling in the French-speaking area of Switzerland. In small villages the locals do not necessarily speak English at all or only a little bit.

We noticed this when we were departing Gruyères, and we did not know that we could not buy tickets straight to Geneva. We had to ask help from the ticket office and the workers there did not speak English.

Luckily I had studied French but to be honest, I felt like an idiot with hearing difficulties most of the time. The locals were very understanding, though, and patiently repeated what they had said if I seemed confused.

I hope you found this post helpful and/or entertaining!
Posted by Jade at 22:06 6 comments: