A tale of an aristocrat vampire 70 years before Bram Stoker's Dracula!

The topic of this post is a novella (or a short story) written by John Polidori, a man who attended the competition of horror writing among Lord Byron and Mary Godwin. She would later become famous as Mary Shelley, the writer of Frankenstein.

The edition of Vampyre* I own has a really good introduction by Christopher Frayling. He states that this story by Polidori was actually first told by Lord Byron in the competition. Byron and Polidori had a falling-out that summer of the competition and Polidori rewrote the story and published it three years later. The situation in 1819, the year of the publishing, was rather heated, there was an introduction attached that linked the vampire of the novella and the extravagant persona of lord Byron. It was also clear that the selling of the novella was influenced by gossips of the day. Here is the novella with those provoking attachments for free, by Project Gutenberg, if you are interested!

Side note: I actually read years ago another interesting short story, that fictionalized Byron and made him a vampire and John Polidori was his victim. It was an intriguing scenario but for the death of me I can't remember where I saw it, who had written it and what was the name!

I really like the Finnish edition of Vampyre by publishing house Faros, the cover is really elegant and gloomy. Here is a photo of the one I own, as you can see it is a bit worn out. 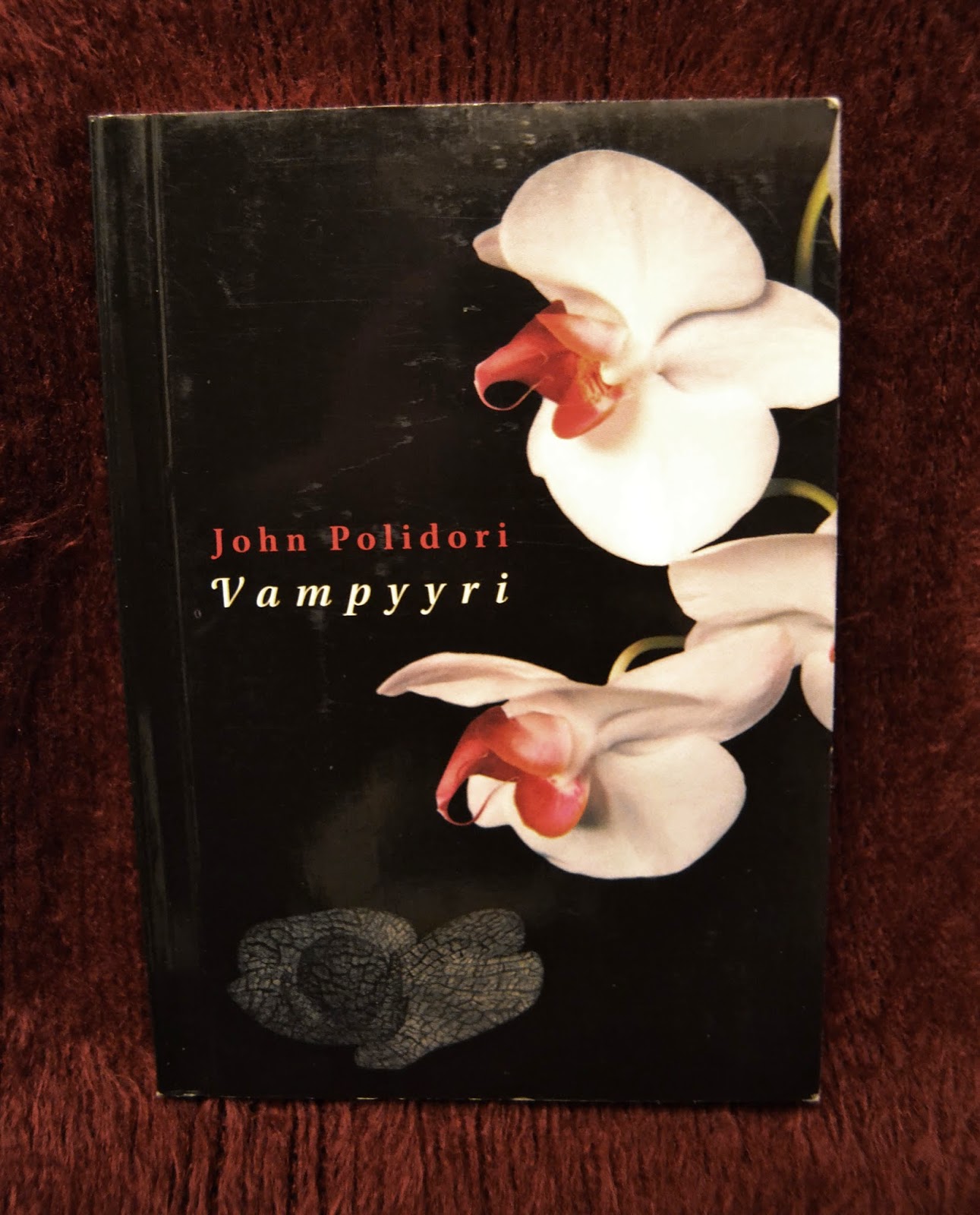 After that beauty of the cover, let's move on to the content of Polidori's novella. I think it is an exceptionally good example of the alive and kicking Romanticism among the era of science and advancement. The narration is almost scientific at points, reporting the story, but the actual events are spooky and supernatural, like in a typical Gothic or Romantic novel. (In this case I am referring to Gothic as a literature genre not a modern subculture.)

I love how the narrator is slightly ironic towards the hero of the story, a young gentleman called Aubrey. The narrator points out that poor Aubrey is a bit silly, believing into all kinds of superstition. Still, Aubrey is a decent bloke, almost too good to be true. He is appalled by vice and he is a real gentleman when it comes to the opposite sex and romantic feelings.

The story is mostly from Aubrey's point of view. That means the narrator concentrates on things Aubrey sees and thinks, instead of elaborating the inner worlds of other characters. Only in the end the thoughts of Lord Ruthven, a man Aubrey believes is a vampire, are revealed. It is quite entertaining, although I must admit all characters are rather plain archetypes. That is understandable, this being the first vampire novel(la).


I would say this horror story is also a tragedy (again as a genre), so the expectations of the reader are going to be rather grim, if they start to read the novella as a tragedy. I hope I am not spoiling too much but a tragedy usually ends in tears, the hero is destroyed by fate, everybody suffers and so on. People tend to love a good tragedy, that's why when you are asked to name the first play by Shakespeare that comes to mind, you usually say Macbeth or Hamlet. Polidori's Vampyre too is going to be a sinister ride for the reader, so I am sure many goths of today will like it!

The language is old, being from the 1819 but the novella is still rather fast to read. I do recommend it.

Thanks for reading and next time I shall post a bit before 24th, and tell a nice little way to DIY old Christmas decorations.


* The whole name of the published book was The Vampyre; A Tale but I'll refer to it as Vampyre.
Posted by Jade at 18:26