Creepy Reads Review: The Sleeper and the Spindle by Neil Gaiman

Today I am going to write about Neil Gaiman's book, or a new fairy tale, The Sleeper and the Spindle, which I found in the department of children's books in Tate Modern's museum shop. I must say that when I was in London, the museum shop of Tate Modern was the best book store I visited. 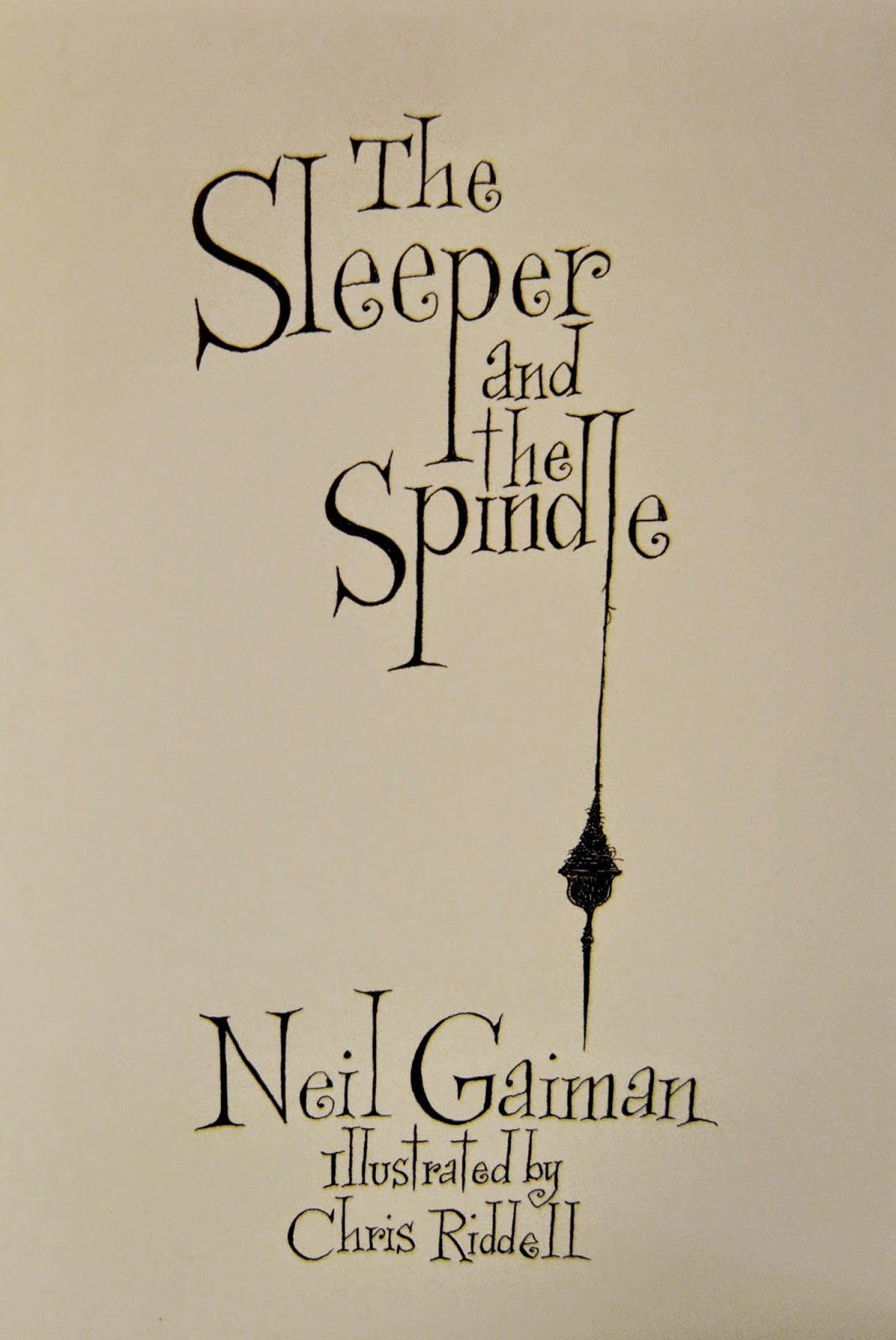 Many of you certainly know Neil Gaiman's works, the more familiar ones are perhaps The Sandman graphic novels, Neverwhere novel and tv-series, and of coarse Stardust and American Gods. The illustrator of The Sleeper and the Spindle is British Chris Riddell, who has been writing and illustrating books for children and youth since the 90's. I checked his webpage and was thrilled by his The Sleep of Reason series and also added one of his books to my reading list due to its title: Alienography or How to spot an alien and what to do about it.

The elements of Gaiman's fairy tale are familiar. A young queen, who has skin white as snow and hair black as raven, learns from a group of dwarfs her kingdom is threatened by a plague of sleep, that is emerging from the neighboring kingdom. Everybody who doesn't flee falls asleep for all eternity, unless a curse is broken. The curse is coming from a castle, surrounded by roses and thick thorns. Sounds familiar, right? It would seem that Snow White has defeated her evil stepmother and the Sleeping Beauty is still sleeping, and no prince is coming to save the day. I do not want to tell the whole plot because I really liked it and would not want to spoil it from you. Therefore this review too is a bit short. 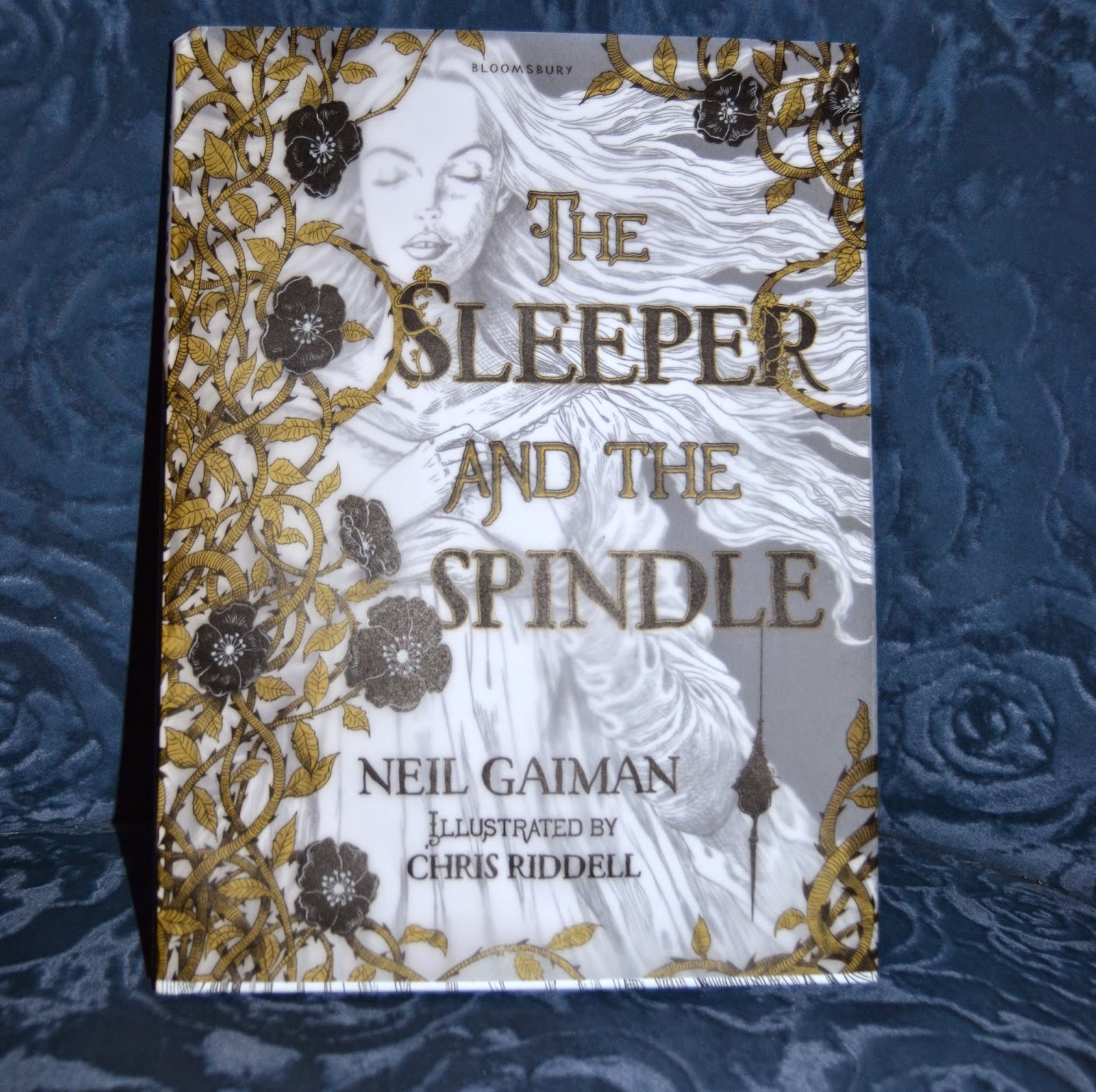 Since I found this book with children's books, I would like to address the matter of this fairy tale actually being a children's story. That might not be the case though it is a picture book. Illustrator Chris Riddell has made stunningly beautiful pictures that fit perfectly the slightly gloomy atmosphere of Gaiman's writing. As you can see of the photos, the illustrations are black and white with a little highlight of gold. The style is more appealing to people twelve-years-old and up than small children. 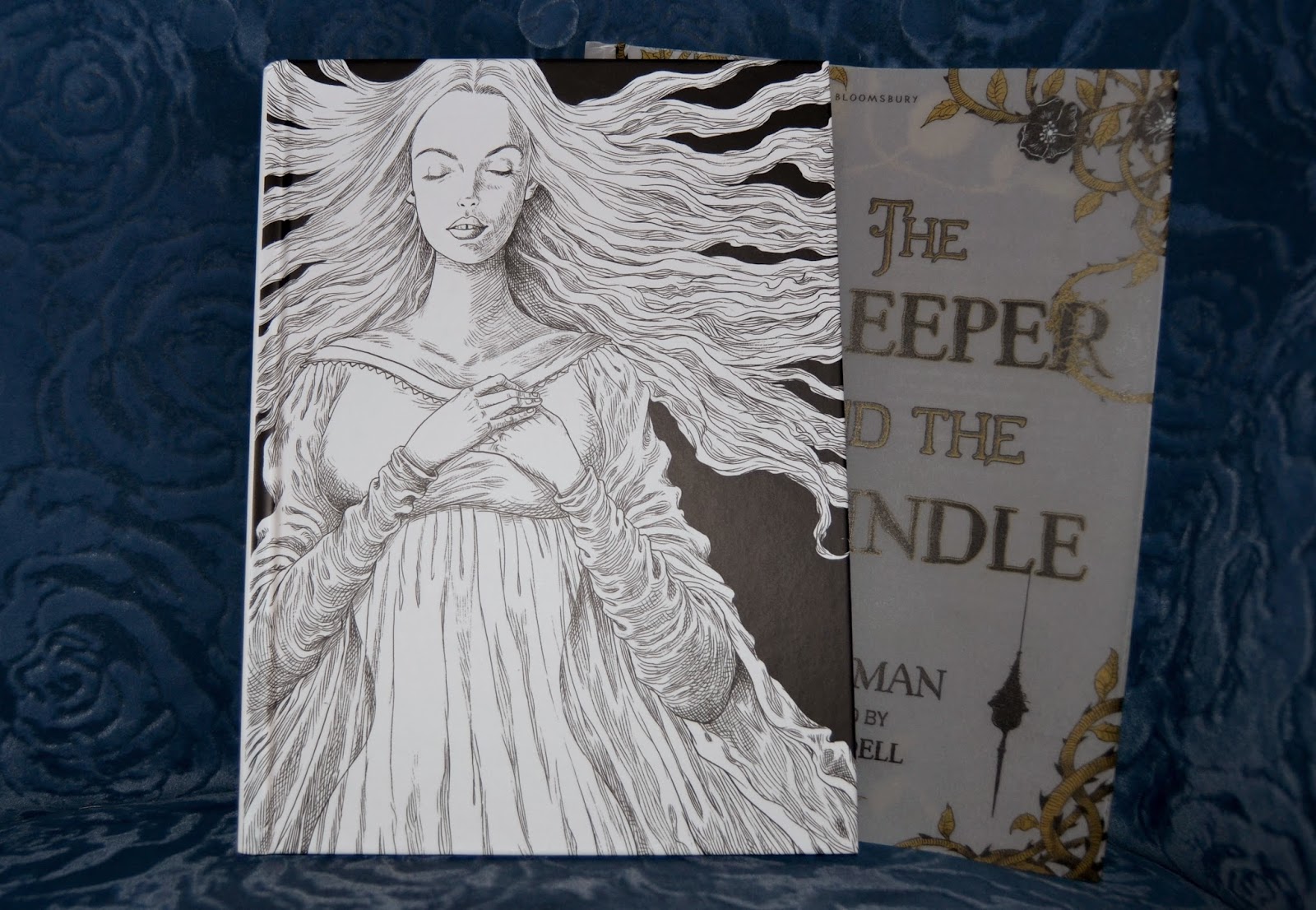 As you can see from these two previous photos, the cover is made interestingly out of two layers. The illustration shimmers from underneath, making an eerie and haunting impression.

Another thing that makes this fairy tale less a children's story is the narration. Firstly the narrator is a bit jumpy, and instead of mostly linear story from the beginning to the end, there are flashbacks and meta remarks like the one about names.

"Have you noticed," asked the shortest of the dwarfs, "something unusual?" They had names, the dwarfs, but human beings were not permitted to know what they were, such things being sacred.
The queen had a name, but nowadays people only ever called her Your Majesty.
Names are in short supply in this telling. 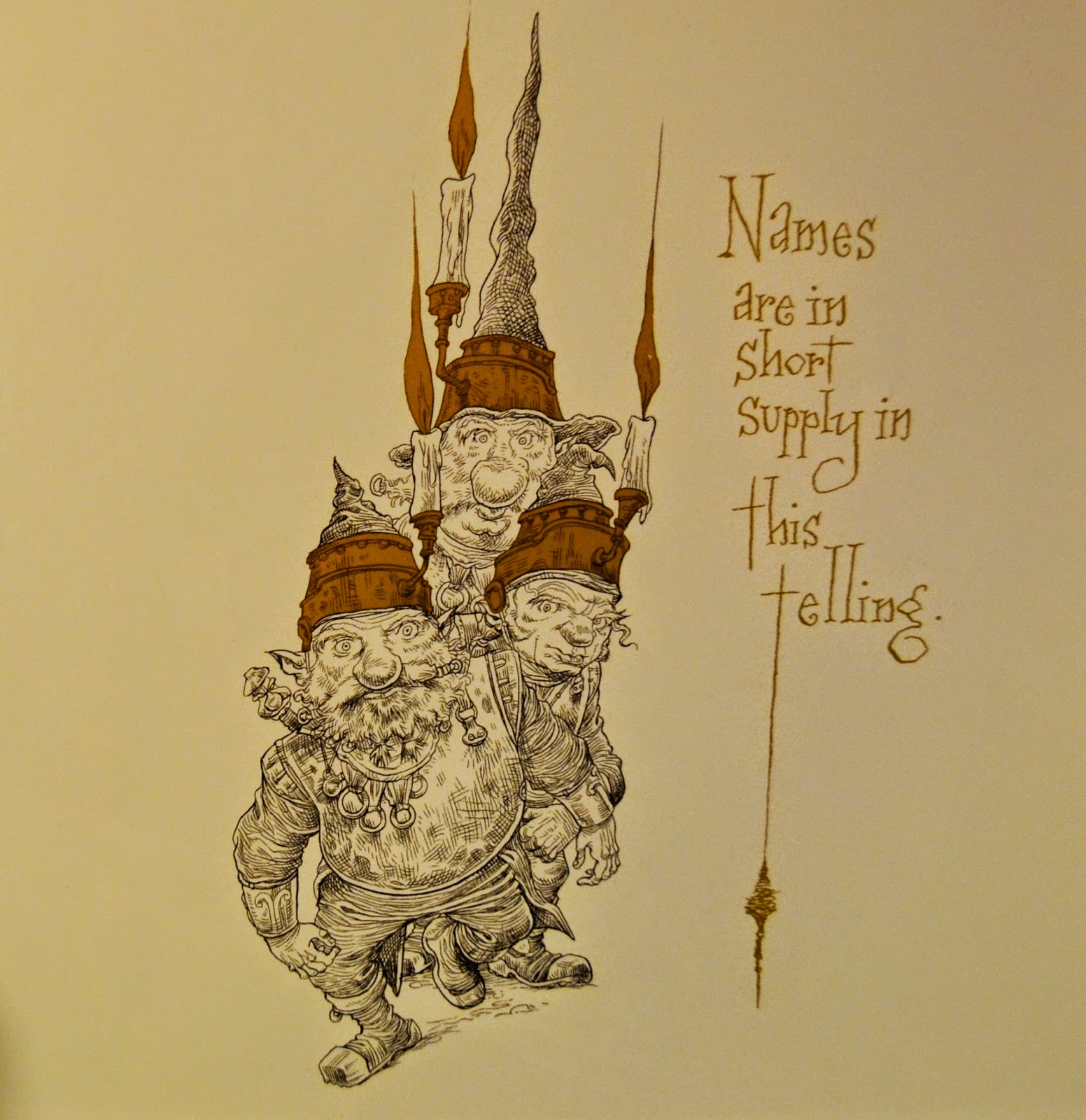 Now that is really untypical for a fairy tale. Of coarse, this tale is written or at least published 2013 so it is not a slave for the conventions of folklore and old fairy tales. Remarks like the one about names interfere with the immersion of the reader and are way more often used in stories for mature readers than for kids. Immersion happens when a reader is caught up in the story and I think The Sleeper and the Spindle systematically estranges the reader from the story's world. The whole kingdom is falling asleep and so the narration becomes more and more like a dream. I loved that the story gets weirder and creepier the longer one reads it.

I am not saying a child would not like this story because of the estranged narration but I do think an adult would enjoy it. I mean that this short novel is fit for people of different ages who like creepy stories. This indeed is a creepy tale, with its sleeping people who move around a bit like zombies, with the heroine who does not submit to the traditional pattern of a fairy tale, and with the evil that is behind the whole curse. Everything is not the way it seems in this story and that is really refreshing for the reader! 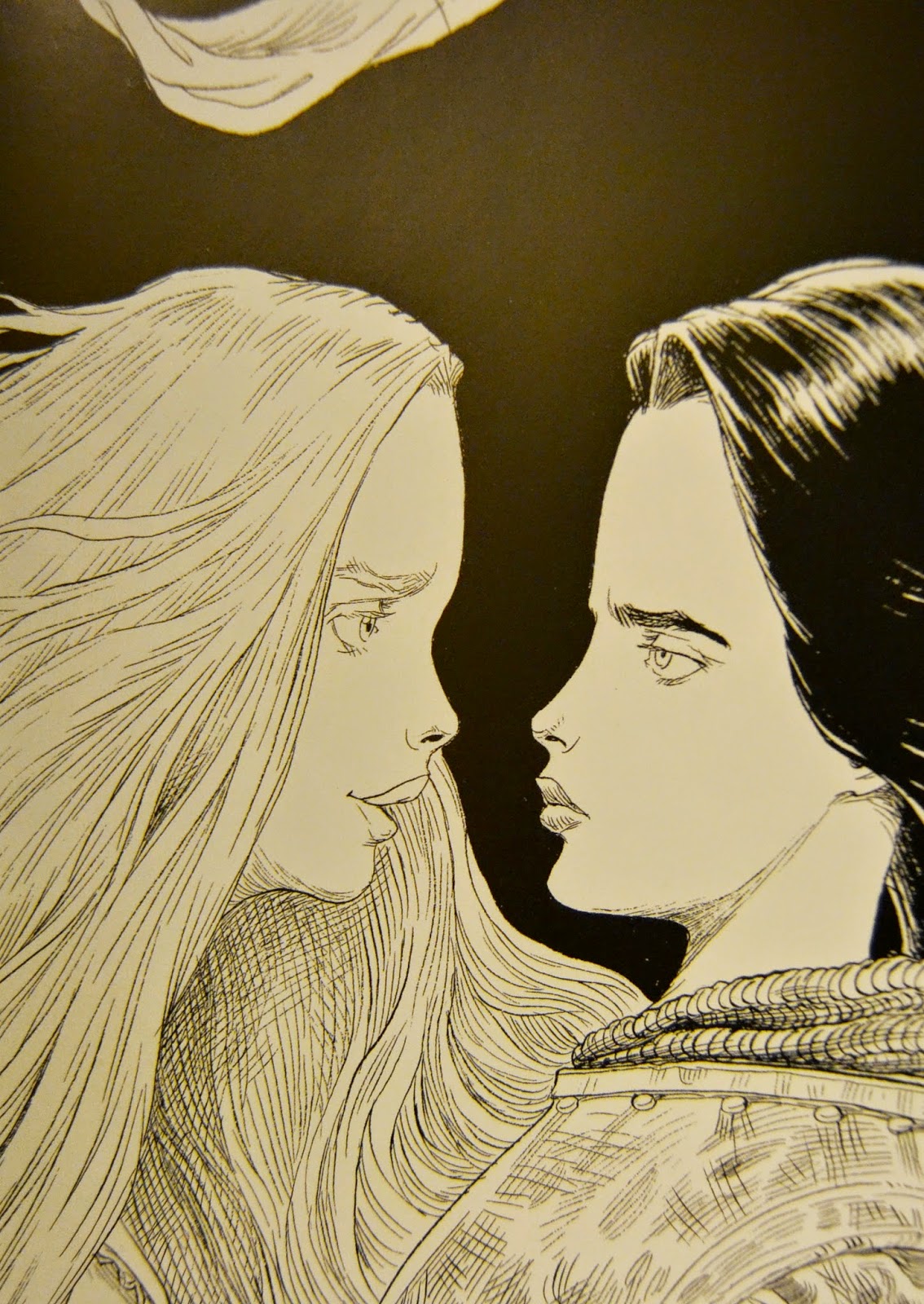 Finally, I would like to concentrate attention to what is partly already said; the way the story is narrated is quite unique and the language is beautiful. It is an intriguing clash of a fairy tale and modern suspense. The character of the queen is strong and definitely not just a girl anymore. She has seen so much and suffered so much and the whole atmosphere of the story is somehow extremely melancholic and agonizing. Still, the narration is light and fine, like a girl sleeping in a glass coffin.

All in all, I do recommend reading The Sleeper and the Spindle and I must say that the rich illustrations can keep one in marvel for many views and reads.
Posted by Jade at 14:15