Gothic Art in Spotlight: In a sleep so deep it might be death

Today in Gothic Art in Spotlight I wish to write about an artwork by Finnish sculptor called Mia Hamari. The artist prefers to be called a sculptor but she creates beautiful paintings too. The work I am concentrating to is actually an oil painting on wood with two small wooden sculptures attached to it.

The work is called Valvojat which could be translated as the Supervisors or the Guardians or even as the Overseers. It refers to the idea that when a human is sleeping, spirit entities, like guardian angels for example, are guarding the sleep and that no harm is done to the person sleeping.

This is a very bleak painting. In the museum's info sign it read that the painting depicts "a sleeping boy". I am not sure how eternal that sleep is, if you know what I mean. Even more uncanny is the point of view: the boy looks like he is watched from an adult's viewpoint, while the boy is lying on bare ground. If one looks at the painting straight from the front, that other wooden figure looks like a melted wax candle, you know the kind people used to have in a wake. 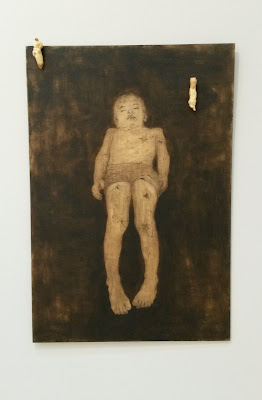 Actually, the wooden sculptures are like small protecting totems. The other one at the top corner is shaped to resemble a stuffed toy dog and the other is slightly more ambiguous. It could be a doll or some sort of a toy bear. The face is distorted and a bit creepy. The skin of the boy looks damaged in some places, hinting of violence, and makes this painting ever so disturbing. 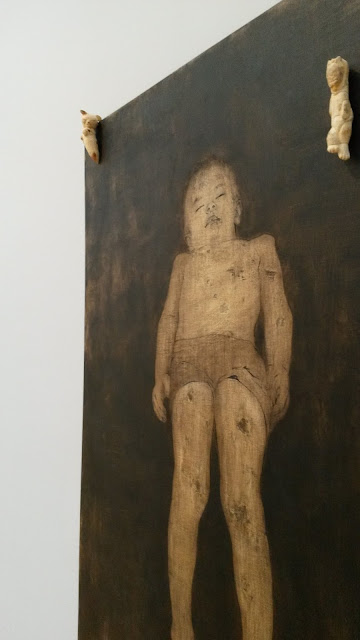 The painting is quite large and this painted little boy is as tall as a living 7-year-old. Or at least I thought so at the time I saw it, I have no idea how tall an average 7-year-old is. It was an impressive painting in the Oulu Museum of Art. This artwork was made during the years 2009 and 2010. The artist's own son was the model for this boy.

This ominous sleep the boy is in reminds me of old shamanism and pagan religions that were flourishing in the woods of my homeland centuries and centuries before the actual state of Finland. Shamans would often get themselves into trance to travel to the lands of dreams and even death to seek knowledge and help from various spirits.

Thanks for reading, and do tell in the comments what you think of this little boy!
Posted by Jade at 22:55