In March, Goth Gardener announced a Baskets & Caskets competition. To participate, one needs to make a post according to the theme Goth Easter. Now, I don't believe this post fits the given topic but nevertheless Goth Gardener inspired me to write this post. :)

This post is once again about the odd traits of the Finns. Previously I've featured Nuuttipukki (the creepy Santa Claus) and fortunetelling traditions.

On Easter, we have a tradition that is very similar to the trick-or-treating on Halloween. It's called 'virpominen'. In short, children dress as witches or Easter bunnies and go around the neighborhood in order to get candy. BUT: they are not like evil spirits on Halloween who threat people with tricks.

Instead it is more like a mutually beneficial transaction. The kids collect and decorate sticks of pussy willow and will use them to cast spells of good luck for the neighbors. After the spell the kids will give the decorated willow to the neighbor and as a payment the kids will receive some candy. 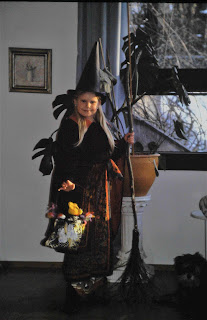 Since I was super fascinated by witches as a kid (and still am), I was as excited about Easter as I was about Christmas. I could dress as a witch myself, it was like heaven! To clarify my behavior, I want to point out that during my childhood Halloween was not a big thing (it is still a very minor holiday here in Finland).

Here is a photo from my childhood. Since Finland is so up North, we used to have winter weather on Easter (at least during the 90's, with the climate change it is sort of a spring nowadays). So, us kids used to have to dress our witch garments over our winter coats. Nevertheless, it was always super fun!

In the photo you'll see the most fashionable gear an Easter witch could have: a black paper board hat and a broom. The broom was made by my father and I had tied some scarfs around my waist to get the proper witch look. The witch's familiar is also appearing in the photo (aka my pet dog).


This tradition has roots both in the Orthodox traditions and in the old customs Finns had before Christianity arrived. I am not an expert on these traditions and beliefs, but here is how I've understood the historical roots of this tradition.

Pussy willows are not just a Finnish thing, in Eastern European countries many people use pussy willow in their rites on Palm Sunday. Palms do not grow here in the North, so people needed to substitute them with some other plant. I'm not sure if this is something people still do, but in the old days a priest blessed the willow sticks and then children took them home, decorated them, and then used the willows to bless their immediate family.
There is also another Christian belief related to virpominen. In the Nordic countries, people believed that during the days between the Good Friday and Easter Sunday the protecting powers of God were, well, diminished. Therefore people believed that evil witches were roaming around the countryside and causing misfortune to people. To prevent this, people did all sorts of protection spells that resemble the idea behind virpominen.

So, that was the Christian part of the tradition of virpominen. I am guessing that the pagan roots of the Finns twisted it a bit and that is why the kids dress as witches for it. In the old times, witches, witch doctors and shamans were appreciated members of the community. I guess that's why there are also good witches who now cast spells of good luck.

I've not heard that other countries would have this tradition of virpominen. If you have, please comment on this post!


I hope you enjoyed this little piece of information and do check out what people contributed to Goth Gardener's competition!
Posted by Jade at 17:56