After this post I shall be taking a one month pause from blogging. It's because of two reasons; Firstly, I already know that September will be very busy for me. Secondly, I need to rethink the concept of my art posts. Evidently the pieces I've lately introduced are not really goth-y. 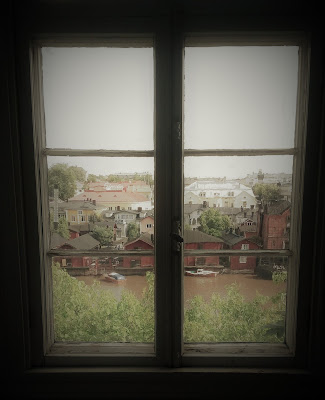 So, for the next month, I'm not writing myself, but I will still read other people's blogs, though!

The piece I shall now introduce is a sculpture. The subject is Ilmatar, which is a mythological creature (often like a sort of minor deity) of the old Finnish folklore. Ilmatar means a female spirit of the air. As you can see, the figure is very slender and she has feathers instead of arms. 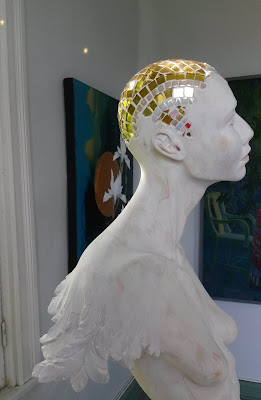 Sculptor Kaj Lindgård made the figure and artist & novelist Katariina Souri made the mosaics. 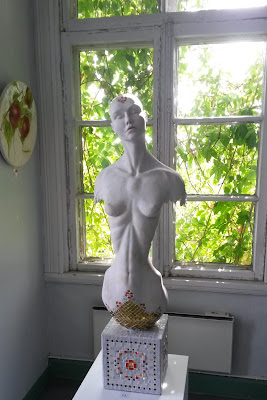 What appeals to me is how this statue balances between being human and being alien. It is like a very cute version of some of HR Giger's alien female characters.

I also think that the position of this work in the gallery was well thought. It would not look the same if it was against a white gallery wall, right?

Now, prehistoric Finnish folklore did not have a strict dogma; the geographical are which is now called Finland was populated sparsely and different villages had slightly different beliefs. Some villages had certain stories and the other villages some other stories. It's a bit like Ancient Greece where there was no 'one collection' of the mythical stories and beliefs before Homer and his Iliad and Odyssey. 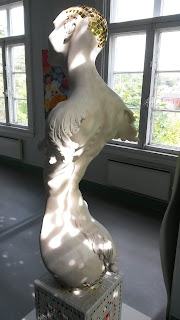 In Finland, the majority of the old folktales were not in the written form but they were always sang and learned by the ear. In the 19th century, when European culture came more popular in the north, old Finnish folk poems started to disappear. 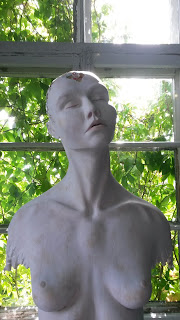 This worried some people and so people started to record (in written form) these folk songs. The most famous of these is Kalevala by Elias Lönnrot (1835). Kalevala inspired J.R.R. Tolkien when he was creating the folktales of the Middle Earth, by the way. The language of the elves even resembles Finnish.

Now, Kalevala, like Iliad and Odyssey, is a one man's edition of all those stories from all those areas. Lönnrot chose certain versions and put them into a time order. And: he used mainly the stories of one or two singers. This means that we have a very narrow scope to the old tales.

In Kalevala, the spirits of the air are not heroic adventures but they are mostly beautiful creatures that are sometimes associated with the maidens of the North (who are mostly prizes for heroes). Which actually is an interesting parallel for this sculpture by Lindgård and Souri; it is a beautiful object we ogle.
Posted by Jade at 16:10