Creepy Reads Review: My Mother She Killed Me, My Father He Ate Me

May's Creepy Reads Review is of a collection of short stories. My Mother She Killed Me, My Father He Ate Me presents forty new fairy tales written by contemporary writers. The name of this compelling anthology is from one of the short stories in it and I think it is a good hint for the readers about how creepy this anthology is. 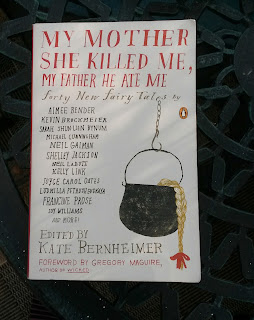 This book is edited by Kate Bernheimer and the foreword is written by Gregory Maguire, the author of Wicked. The collection is dedicated to Angela Carter, one of my favorite writers. Her novels and short stories play with perverse, fairy tales, grotesque, and many other things goth readers will enjoy. Especially her collection of short stories The Bloody Chamber and Other Stories, which is a collection of retold fairy tales and it is probably the reason why My Mother She Killed Me, My Father He Ate Me is dedicated to Carter. I highly recommend reading both of these collections.

I read My Mother She Killed Me, My Father He Ate Me while I was in the United States and I was intrigued by one thing. When I would mention I was reading these contemporary fairy tales people were always interested and they would not really know much about fairy tales or more precisely about their history. Even one woman who was a teacher did not know that the original fairy tales were not for children but for adults. The folklore from previous centuries was filled with eroticism, horror, and violence. The stories were told after a hard day of work in a situation there was no much other entertainment.

People often say the stories Brothers Grimm collected were violent and there was much gore but according to research on folklore, the brothers actually toned down those stories while they were gathering them around the rural areas. All stories in this collection are not remakes of Grimms' fairy tales. Neil Gaiman has retold The Odyssey from Ancient Greece in his story Orange. Other writers were inspired by Russian folklore and others by Vietnamese, Japanese, and Mexican folklore.

Since there are forty stories I am not going to talk about all of them. I am only going to mention a couple. Though first I must say that you do not have to know the stories that the writers used as inspiration. You can just enjoy the stories as they are but of coarse knowing about folklore and fairy tales some basic things like the usual structure and narrative conventions is probably going to bring more to your reading experience of My Mother She Killed Me, My Father He Ate Me. Even if you are not familiar with the traditions behind a story, in the end of every tale in this book there is afterwords by the author or in some cases a translator or the editor, and those afterwords bring more light to the choices the author made and why the story is like it is. Very handy, I must say!

Some stories in this anthology I liked very much, some not so much but I could still appreciate the quality and the use of literary traditions in those stories too. The Warm Mouth by Joyelle McSweeney is a good example of the stories that bring back the violence and gore to fairy tale. The Warm Mouth also honors the importance of repetition in old stories, and so does The Swan Brothers by Shelley Jackson. Jackson's novella is divided into little fractions that have titles like "The Performance Artist Dreams" and "The Youngest Brother's Lover". The world of the story is shielded and at first it is hard to understand what actually is happening, since the characters and their actions keep changing like in a feverish dream.

My favorite stories were Baba Iaga and the Pelican Child by Joy Williams, With Hair of Hand-Spun Gold by Neil LaBute, and The Mermaid in the Tree by Katherine Vaz:

Baba Yaga is a character from Russian folklore, a cannibal witch who lives in a creepy cottage that moves around with chicken legs. In Joy Williams' story this Baba Iaga is not representing the forces of evil, as she usually does and the story has that eerie atmosphere that fairy tales usually have.

With Hair of Hand-Spun Gold is a remake of the story of Rumplestiltskin. In the original story Rumplestiltskin is this fairy creature who can spun gold from straws and has a habit of trying to get other people's firstborns. Neil LaBute's story is a "realistic" story, which means it is situated in a world that has no magic and the characters are quite normal people like us. The narrator is this story's Rumplestiltskin but instead of being a weirdo after other people's children he is actually taking a revenge on his former mistress. The anger and thirst of revenge are deliciously presented in the narration!

The Mermaid in the Tree starts with these words: "Desiree, the child bride, and her sister Miranda had gone grave robbing for a wedding gown." Need I say more? This is a twisted, creepy, and extremely well written story after H. C. Andersen's The Little Mermaid. I loved it and found it very inspiring.

These stories are perfect to read in the evening before going to sleep. I at least had some very interesting dreams after some of the tales! I bought my copy in London, Tate Modern's museum shop. This anthology was published by Penguin Books and you can get a brand new copy of your own for approximately 15 USD.
Posted by Jade at 15:59