About Gothic Art Books, and where is Goth Art going (part 1) 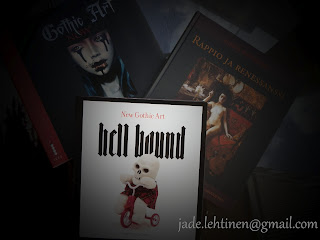 There is no strict definition of what is "goth" and what is not. So it is no surprise that this applies to gothic art too. There are still some generally approved indicators which can lead to a conclusion of something being goth. For example descriptive words like sinister, twisted, wicked, creepy, dark and decayed are marks that can point something being gothic. (But can very well not point, it depends of the density of these words, are they used by many people or many of them at the same time and so on.)

I'm now in separate posts going to present two art books that use word "Gothic" in their title and one book, which is in Finnish but the title can be translated as "Degradation and Renaissance: Decadence in Finland's Fine Arts and Literature". 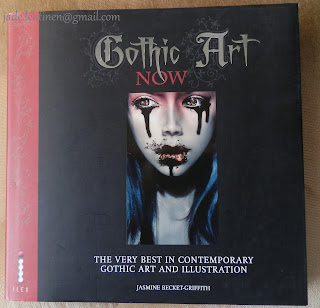 I'll start with Gothic Art NOW by Jasmine Becket-Griffith, which was published 2008. It introduces many fine pieces of art like Dorian Cleavenger's The Chambermaid, for which Dita Von Teese modelled, and Jessica Joslin's sculptures.

There is also quite a number of artists introduced whose work looks like something one finds in Deviantart, made by thousands of others.  Those digital paintings are pretty, but they are more posters and market art (I'm not sure how this is said in English, but in my language this means something pretty but not of good quality or not that significant).


In Gothic Art NOW the artworks are divided into eight chapters like Femme Fatales, Men in Black and Gothic Elegance. In Femme Fatales there are women, but those art works do not differ in style or use of equipment from Men in Black chapter's content. Or from others on that matter. I would say that the first three chapters are quite fan-art and J-pop oriented.

Somehow different is chapter Lurking Horror where are probably the best works and there are many different styles. More great works are in chapter Creepy Creations and there is even some statues. It differs from other chapters too, in a positive way.

This might sound really negative, but I do not mean it that harsh. I'm only saying, that if the content had been organized in some other way, the book would give much more professional feel. I do think that almost every work it presents is pretty or intriguing.

What do you think, what does "gothic art" mean to you?