Gothic Art in Spotlight: Giant Toys and a Giant's Church 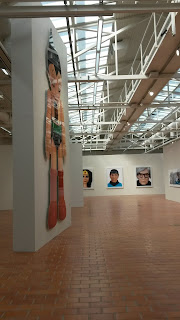 This post is another combination of Gothic Art in Spotlight and Road Trip 2015. Before Finnish nature I feature art that examines products of pop culture and among them are the characters of Sin City and Edward the Scissor hands and they do appeal goths.

Please click photos for larger view, otherwise it can be hard to recognize all the characters, especially in "Family portraits" as the artists refer to the group displays. :)

On the left is a photo were you can see the largest toy giant. It was about 4 meters long but the others were mostly 1 - 2 meters long.

Exhibition Toygiants in the Pori Art Museum is composed of photographs of toy figures in enormous scale. The individual photographs have no name nor are there labels telling at what year the photo was taken. It is a collection, not separate works, just like the toys in the photos. However, the photos are taken between 2004 and 2008 and instead of "an exhibition" I could also call this art project, because it kind of is that too. 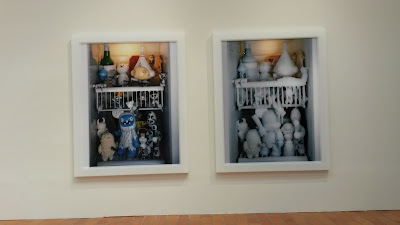 All toys are from a private collection of Selim Varol. Collections and collecting are themes that characterize the whole exhibition. Many photographs portray groups of figurines and when one wanders around the exhibition, it is more like a collection itself: no photo is individual. They are as individual as Batman or Joker figures. They stand alone but they belong to the same series. 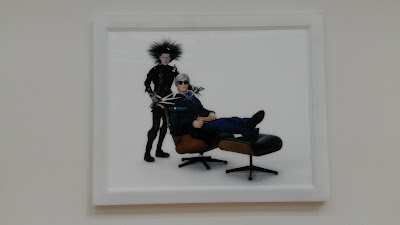 If you are wondering about the name Toygiants and have I written it correctly, the answer is yes. The artists behind this exhibition sized work are German Daniel and Geo Fuchs. In English many (closed) compound words are actually written separately but that is not the case in German, nor is it in Swedish or Finnish. A simple example is the word "school bus". In German it is der Schulbus. The artists have chosen to write Toygiants instead of Toy Giants. I actually am slightly puzzled by the secret rules of closed compound in English: why a school bus separately but a football together? 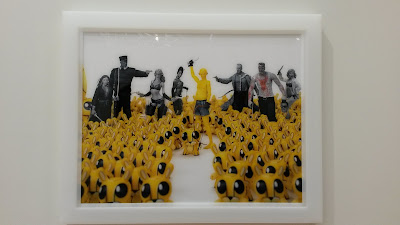 Oh, and just so you know, the last name of the artists is not a rude word but means a Fox as far as I know. :)

Lastly, a photo of the wall of fame with action figures of famous characters from the movies. 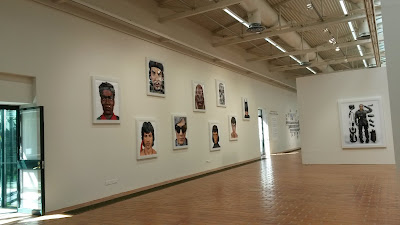 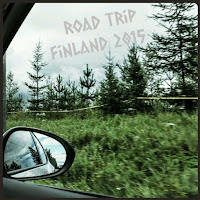 To continue the theme of Giants, I am now going to write about the Giant's Church. There are approximately 30 giant's churches in Finland, mostly on the West area. They are massive formations of stones and are very likely man made. They are from about 2 000 BCE so, that means they are from the middle of Neolithic Age.

When driving from Oulu down towards Vaasa we noticed a sign on the side of the road telling that there is a Giant's Church 8 kilometers away from our route, so we decided to make a little detour.

I had never visited a giant's church before so I was really excited. Must say though, that the route from the main road to the castle was curvy and at some point I was slightly worried we had taken a wrong turn. There were signs, but often bushes and tree branches had grown in front of them.

When we arrived to a small parking lot (for about 5 cars) we noticed the Neolithic tourist attraction called "Vanha kastelli" was not the only thing to see. 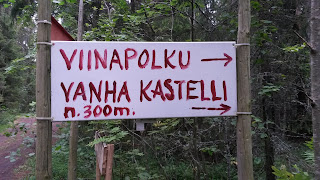 "Viinapolku" is not as old, it is from the 18th century. Polku means a small footpath or a trail and viina is a strong and colorless alcohol beverage, like vodka, for example. During the 18th century and in this case it most likely meant a spirit that was brewed at home. To shorten the name, "Vodka Trail" was created by two elderly men and their friendship. They walked that trail to see each other, to talk and to drink a little. The trail was and still is between two old estates. It used to have crossings but now it is overgrown from here and there. 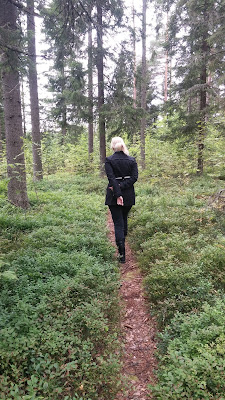 It was evident that the local village association was lively, because there were boards about the local history and about old superstitious. At the beginning of the trail was a board that had a spell written on it and the passers-by were kindly asked to read it out loud for their own protection. It was a spell against the demons / goblins of the forest, to prevent them from making humans lost or captured by evil forces. The spell was only in Finnish I am afraid, and I am not going to even try to translate it! When walked down the trail, there were other spells to, for good luck in hunting among other things.

We walked the Vodka Trail and after that took another road and headed to the Giant's Church.

Nobody knows for sure what these huge stonewall circles were for. There is evidence that people had homes around it. This particular Giant's Church has six holes or gates in its walls. Naturally, if there were structures of wood, they have long gone and disintegrated.

I took a photo of the information board's map so that you can really see what shape this ancient church is. 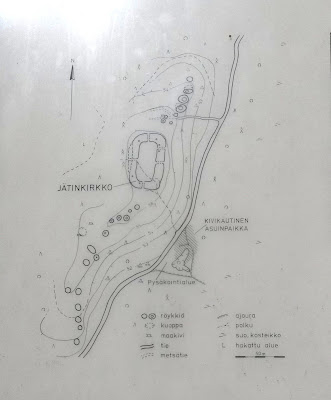 "Jätinkirkko" means the Giant's Church and "kivikautinen asuinpaikka" is where they've found ruins of habitation from the Stone Age.

The name Giant's Church was invented by the humans who later inhabited the area. They were farmers and other not so highly educated people so they sthought the odd and enormous ruins were made by giants. Giants are actually in bigger role in Norwegian and Swedish folklore than in Finnish. Probably partly because Norway and Sweden have more mountains than Finland. Mountains call for bigger beasts, don't you think? 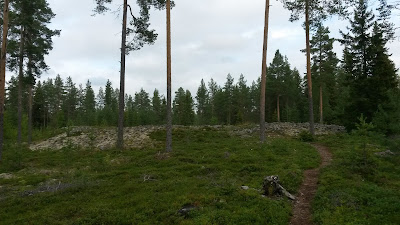 In the old Finnish folklore the deity of woods and hunting, Tapio, could change his size and be taller than pine trees but if he was to interact with humans, he would often be their size and come to rest at their campfire. The goblin creatures and other evil forces of forests in Finnish folklore are no bigger than human, usually. Some are as tiny as ants, when they roam around woods but that is not a good thing. The legend says that if you cross a path of the goblin creatures you might accidentally get "caught" and are forced to walk in the woods for all eternity with no way out. The tiny ant size creatures walk so tiny roads it is hard to be aware of them!

I must write another post about old folklore, because the Baltic-Finnic tales (Finland and Estonia) do differ from the tales in Norway and Sweden. 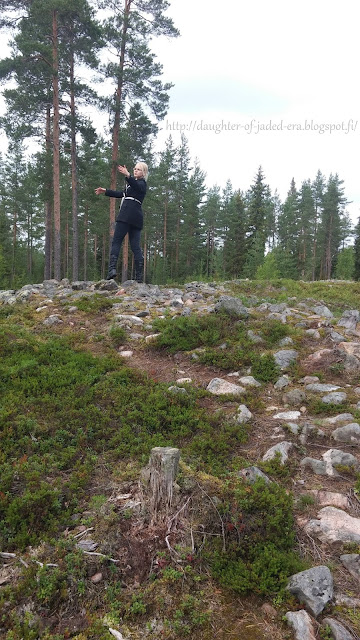 Here you can see me, apparently dancing tango all by myself on the wall of the church. Nah, actually I was just in the middle of telling some juicy story or blabbing about something and I was caught in mid-sentence.

Notice also that the stone walls are partly soil. Probably because of the 4 000 years that have passed since they were build but I am not sure if soil really was used to tie the rocks together. I am in noway an expert on Stone Age.

The stones were a bit loose here and there, especially on the top parts of the walls. I was really happy I had good boots on when we went there, not summery ballerinas!

I just have to say it was really hard to try to take a decent photo of this huge stone wall square and I can honestly admit I did not succeed. The area is roughly the shape of a small football field and about the same size (62 X 36 meters). The walls are 2 meters high and 7 meters wide.

Next up: Personal life changes because I am moving to a new apartment next week!