I bought today new buttons for my coat, but have not stitched them. The coat is white, which many think is not that gothic color but I disagree. White and black make an intriguing contrast. In this pic the buttons look all most brown, but in real life they are much more red, like wine red. There is some stitching to do this evening! 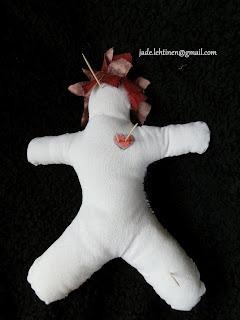 Voodoo-doll of Ron Weasley to be a prop in my student association's pin up calender. The theme is popular culture and one of the ladies is the Harry Potter character Hermione, doing some love magic via the voodoo doll. I have made Ron out of an old pillow (the stuffing) and of two old T-shirts (one white, the other is his hair) and at the moment he is still missing a little woollen scarf with gryffindor colors. I am not going to do it, since on of my fellow students is a maniac with knitting. 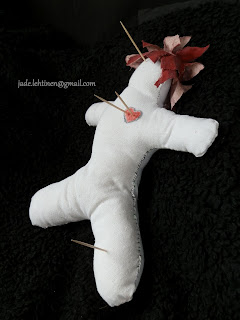 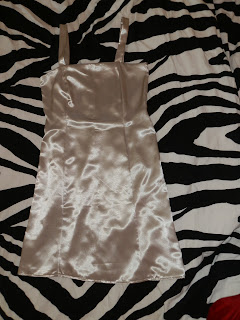 Unfinished task number three:
A white dress I bought form a flea market with 3 euros. It is about  a size or two too big so I should get my sewing machine to work and take in a bit.


Unfinished task number four:
A custom made Chinese dress, which is made of pinstripe. I'm goint to explain about it more when Creative Goth Summer Weeks comes to the part where one tells about projects that are too massive for the participant. :) Still, here is a little pic of the dress. 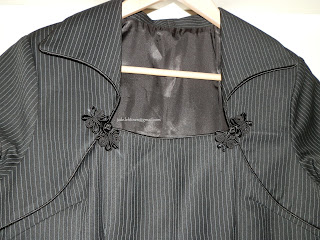